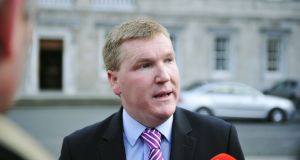 Fianna Fail inance spokesman Michael McGrath said a full State Enterprise Bank would be created and retained regardless of what stake the State retained in other banks. Photograph: Aidan Crawley

Fianna Fail would create a new State-owned bank to lend to every company regardless of their size if elected to Government.

The party’s manifesto will commit to a number of proposals aimed at filling what it says are gaps in the banking sector.

Its finance spokesman Michael McGrath said a full State Enterprise Bank would be created and retained regardless of what stake the State retained in other banks.

Mr McGrath said it has the potential to be a permanent solution to the difficulties businesses have in accessing credit.

He added: “ It would lend to any company, regardless of sector or size, provided it can demonstrate its creditworthiness.

“It would remain in State ownership even if the State disposes of its stakes in Bank of Ireland and AIB.

“This was promised by the current government but only partially delivered in the form of the Strategic Banking Corporation of Ireland which has had very limited impact to date.”

Mr McGrath said the dominance of the two pillar banks, Bank of Ireland and Allied Irish Bank, is creating a lack of competition, higher costs for customers and blocking product innovation.

Fianna Fail will commit to examining the sale of EBS as a separate mortgage bank. It is currently merged with AIB.

Mr McGrath said this would “acknowledge the fact that the loss of the building societies has had a long term negative impact on the mortgage market”.

The party would also require the Central Bank to publish targets for dealing with the debt of small and medium enterprises.

It will also call for a code of conduct to be put in place for people seeking to switch their mortgages.

Mr McGrath said: “A strong code would provide certainty to mortgage holders about the process involved and ensure the mortgage holder’s rights are protected.”

The party’s manifesto would also confirm the party’s proposals to introduce legislation to influence the mortgage interest rates charged to customers.

The plans were released as Minister for Finance Michael Noonan criticised the Fianna Fail’s tax proposals.

Mr Noonan said Fianna Fail is opposed to the reduction of income tax and the Universal Social Charge.

He said the party is wedded to “the same high tax, high spend approach by which they ruined our economy last time they were in government”.

The Minister said: “We cannot go back to the same old Fianna Fail who wrecked the economy, have learned nothing from the past and are still the high tax, high spend party.”

He said Fianna Fail’s budget proposals for 2016 included reductions in the income tax burden for all workers.

Mr McGrath said: “In case Minister Noonan is under any illusions, Fianna Fáil will be proposing a series of reductions in the Universal Social Charge for workers in our election manifesto.

“However, we will do so in a responsible way which also takes account of the need to invest in vital areas of public services so badly neglected by this government such as education, health, housing and justice.”

1 Will brother’s widow get half of our parents’ estate when they die?
2 Banks face ‘hectic’ loan restructuring as payment breaks end, Goodbody warns
3 Should I switch bank now with Ulster Bank at risk of closing?
4 Save yourself money and heartache by reviewing your house insurance
5 ‘I have three children and a dog, so I feel like a bit of a human ATM’
6 EU said to be leaning towards appealing Apple tax decision
7 Finance Ireland refinances mortgages with low level of payment breaks
8 Belfast mailbox address used by account holder in Russian money-laundering scheme
9 Household wealth grew by €76,000 in years following financial crash
10 EU watchdog calls for end to Covid loan payment breaks
Real news has value SUBSCRIBE