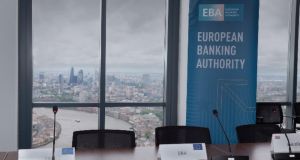 City of London seen through the window of the European Banking Authority: it is set to move elsewhere in Europe after Brexit

Ireland looks set to miss out on the European Banking Authority relocating to to Dublin when the UK leaves the EU, Fine Gael MEP Brian Hayes has warned.

Mr Hayes, who represents the Dublin constituency in the European parliament, said Warsaw and Milan are leading the battle to win approval from large member states to secure the EBA, which is based in London.

“It has emerged that there is consensus among some of the larger member states that the preference for the EBA would be to go to either Warsaw or Milan following Brexit, ” he told The Irish Times.

“Milan is regarded as a positive option because it is understood that there was a de facto agreement in place that the three largest member states would always host the three European supervisory authorities separately. With the UK leaving, this would leave Italy as the third-largest state and Milan in position to take the EBA.

“The rationale for Warsaw is that it would be a fair compromise to keep the EBA in a non-euro-zone country in order to foster a strong economic connection between euro and non-euro countries. Giving the EBA to the UK in the first place was largely seen as a concession to non-euro-zone countries that they were firmly part of the EU’s economic architecture. This is a perfectly valid and understandable argument.

“The Government has a tough fight on its hands but it must continue to pursue the message of Dublin as the ideal location. This is a decision that should be taken quickly once Article 50 is triggered.”

The Government made a formal pitch to have the EBA relocated to Ireland on October 25th following a recommendation by the Minister for Finance Michael Noonan. Set up in 2011, the EBA is tasked with achieving a harmonised and integrated approach to banking supervision across the EU.

Its core areas are regulatory policy, supervisory work and risk assessment, consumer protection, and financial innovation. The authority has 156 staff, set to rise to 189 in the coming months. All staff must be citizens of the European Economic Area.

Mr Hayes said moving the EBA to Dublin would send a “strong political message to smaller member states to say that they have a serious role in shaping EU policy”, adding that the EU should not allow larger EU countries to “take all the spoils”.

The Government is also seeking to have the European Medicines Agency relocated to Ireland from London.