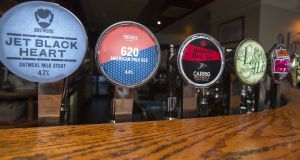 Insurance costs for Dublin publicans typically range from €15,000 to €25,000 a year, according to the Licensed Vintners Association. Photograph: Dave Meehan

Dublin publicans have been hit by “crippling” 20 per cent insurance hikes in each of the past two years, threatening the viability of pubs in the capital, according to the Licensed Vintners Association.

“Insurance costs for Dublin publicans are a very serious expense, typically ranging from €15,000 to €25,000 per annum,” said Donall O’Keeffe, chief executive of the LVA. “However, many larger LVA members, especially in the late bar scene, are facing premiums of €50,000 to €100,000 per annum. Such increases are simply not sustainable.”

The warning comes as most of the recent focus by politicians and industry has been on the issue of soaring motor coverage rates, as more cars take to the roads in a recovering economy and court awards for bodily injuries have soared in recent years. Motor insurance costs jumped at an annual rate of 28 per cent in August, according to the latest Central Statistics Office data, bringing total inflation over the past three years to almost 70 per cent.

“The [Oireachtas] Joint Committee on Finance, Public Expenditure and Reform recently announced it would be investigating the motor insurance industry. We are calling on the Government to expand the work of that committee to include business insurance. Action must be taken immediately before these outrageous increases force businesses to the brink, putting jobs at risk in the process,” Mr O’Keeffe said.

Mr O’Keeffe said that the current regime in Ireland where injured parties have two years to make a claim is “completely excessive” and that the majority of claims are bypassing the Personal Injuries Assessment Board (PIAB) process.

Fiona Muldoon, chief executive of FBD, the State’s only publicly-listed insurer, is among industry figures calling for legislation to be strengthened to give PIAB powers to compel co-operation from both sides of a claim “so that every settlement is not adversarial, with two sets of lawyers and two sets of experts”.