David Drumm’s return by way of arrest, appeal and extradition

Nearly seven years after he took refuge in Massachusetts, an ex-banker returns 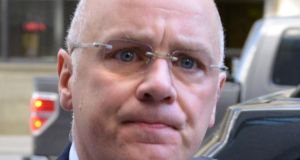 When US federal agents arrived to arrest former Anglo Irish Bank chief executive David Drumm last October at his Massachusetts home – more than six years after the demise of the bank he had led – it came as a surprise.

The arrest came on the back of an extradition request from Dublin. The Irish authorities wanted the 49-year-old former banker returned to face 33 charges including forgery, conspiracy to defraud and false accounting. These related to transactions carried out in late 2007 and 2008, when the bank was scrambling to avoid collapse during the financial crisis.

Drumm had moved to Massachusetts in June 2009, six months after resigning from the bank, settling with his family in the wealthy Boston commuter town of Wellesley.

The extradition request alleged that the Dubliner had broken six laws (three of them multiple times) in two series of transactions. The first propped up Anglo’s share price, and the second made the bank’s funding position look better than it was, both closely watched barometers in the financial crisis.

It is also alleged that Drumm told Anglo employees, including its director of treasury, Matt Cullen, to ask Irish Life & Permanent to agree to circular transactions with Anglo. The back-to-back deposits – €750 million in March 2008 and €7.2 billion in September 2008 – allowed the bank to present the deposits placed back with Anglo by a non-banking subsidiary of Irish Life & Permanent as corporate deposits, which were viewed as a stronger funding. The transactions helped to mask the large outflows of deposits lost in runs on the bank.

Drumm had already tried and failed to apply for bankruptcy in the US in 2010, shortly after his arrival in the country. Had he been successful he would have had his debts wiped out, including €8.5 million owed to his former bank.

A month after his arrest, he failed in an appeal to have that bankruptcy ruling overturned.

He also failed to secure bail in relation to the extradition proceedings, with magistrate judge Donald Cabell saying the seriousness of the charges against him gave him an “incentive to flee”. Drumm was detained at the maximum-security prison Plymouth County Correctional Facility near Boston.

Later that month, it emerged that lawyers for Drumm had written to the Director of Public Prosecutions saying he would be willing to return to Ireland voluntarily to face trial if the State agreed not to oppose bail. No such commitment was forthcoming.

Finally, on February 11th, Drumm abandoned his legal challenge against extradition, telling Cabell he was waiving his right to a formal extradition hearing and opting instead to return home to fight the 33 charges against him.

This morning he returns to a country much changed from the one he left in the midst of a financial crisis but still bearing many of the scars from the events of that time.