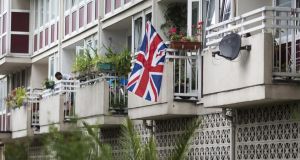 UK Chancellor of the Exchequer George Osborne began the second phase of his mortgage-boosting plan as concerns persist that it will fuel a property bubble.

Royal Bank of Scotland’s Natwest unit and Lloyds Banking Group ’s Halifax and Bank of Scotland will start offering Help-to-Buy mortgages this week, with Virgin Money Holdings and Aldermore Bank planning to start in 2014, the Treasury in London said in a statement today.

The program allows people to buy a home costing as much as £600,000 pounds (€709,000) with a deposit of as little as 5 per cent. The first phase came into effect in April, and Prime Minister David Cameron last week brought forward the start of the second from January, dismissing criticism that the plan may help fuel a bubble.

Halifax said this month that house prices rose for an eighth month in September and lawmaker Andrew Tyrie, who heads the Parliament’s Treasury Committee, said today that intervention in the property market risks causing distortions.

“The government has yet to allay the committee’s concerns,” Mr Tyrie, a member of Cameron’s Conservative Party, said. “Given the checkered history of interventions in residential property, great care will need to be taken in both the construction and running of this scheme.”

Under the mortgage plan, the government guarantees as much as 15 per cent of the purchase price in return for a fee from the lender. Fees will be charged as a percentage of the original loan amount and be reset every year. For 2014, they will range from 28 basis points, or 0.28 percentage points, for mortgages between 80 per cent and 85 per cent of the value of the property, to 90 basis points for loans between 90 per cent and 95 per cent, Osborne said in a written statement to lawmakers today.

Cameron said today the government “had to act” to help prospective homebuyers.

“Too many hardworking people are finding it impossible to buy their own home,” he said. “Buying your first home is about far more than four walls to sleep at night. It’s somewhere to put down roots and raise a family. It’s an investment for the future.”