“Brian knew we were helping Ireland more than any other country" 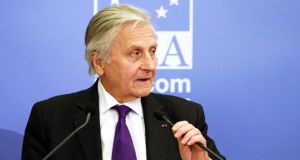 Former president of the European Central Bank Jean-Claude Trichet is answering questions from the Banking Inquiry at the RHK in Dublin. Photograph: Eric Luke/The Irish Times 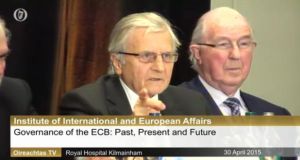 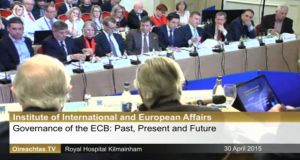 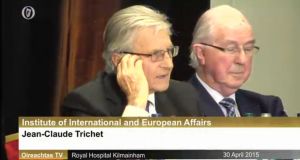 Former president of the European Central Bank Jean-Claude Trichet has rejected a claim that the ECB blackmailed Ireland into entering the Troika bailout by threatening to cut off credit to the country in a letter to late former minister for finance Brian Lenihan in November 2010.

“It’s exactly the contrary,” he said in response to the claim by Socialist Party TD Joe Higgins.

An equivalent figure in the United States would “probably” have resulted in the Federal Reserve providing credit of $10 trillion to $13 trillion in liquidity for its government.

Mr Trichet was speaking at the Institute of International and European Affairs in Dublin, where he answered questions from members of the Banking Inquiry team.

“Brian knew we were helping Ireland more than any other country. We were together on the same side trying to get out of a situation that was unfortunately the most dramatic you could imagine.”

Mr Trichet said there are now ECB rules governing the list of creditors on the order in which they would “get burned” in any future banking collapse, to ensure “that we know what to do in the circumstance”.

“When Lehman Brothers collapsed... there was no such system.”

This resulted in the problems incurred by the Irish banks and elsewhere in the euro area financial system, he said.

Mr Trichet added he made no request to Central Bank governor Patrick Honohan to go on RTÉ Radio in November 2010 to announce to the Irish public that Ireland was entering an IMF-EU bailout programme.

“I have absolutely no memory of such an announcement,” he said. “I certainly didn’t ask him to make public anything.”

‘You know better than I’

Kieran O’Donnell of Fine Gael asked whether Ireland was right to enter a bailout.

“You know better than I,” was Mr Trichet’s response.

“You can judge by yourself whether measure of adjustment that was taken” was correct.

“It goes without saying that the government of Ireland took a good decision.”

The ECB, he continued, could not have continued to extend unlimited credit to Ireland. At peak it was 100 per cent of Ireland’s GDP.

On the bank guarantee, he said the ECB “never hestitated to support Ireland”, but he would “probably” have advised the government to consult with other EU states on what he described as a “new concept”.

“We were not in favour of this guarantee. We are on record on this in writing,” he added.

Earlier, Mr Trichet told Banking Inquiry chairman Ciaran Lynch there was “no contact” from the then Irish government in relation to the blanket bank guarantee and “either me or the ECB or to my knowledge other [EU] governments”.

Mr Trichet said concerns about Irish banks first became known to him in August 2007 when the ECB had given an unlimited level of liquidity supply to banks in the euro area - as long as they had sufficient collateral.

“We had to rely upon judgment made by the national authority [in Ireland] at that time.

“There was absolutely no suggestion from the regulator [in Ireland] that Irish banks were insolvent at the time.”

He said the ECB later enhanced its surveillance of Irish banks and it became clear over time that there were deep and fundamental funding issues in the Irish financial system.

Mr Trichet told Sinn Féin’s Pearse Doherty that the ECB had “no responsibility” for banking regulation at a national level before the financial crash in 2008. He said the Irish banking authorities were protective of their own powers at the time.

“It was not a good system and that is why it has been changed.”

The Irish economy had recovered so soon, he added, because of flexibility in the market here, something he had praised in the boom years before the 2008 crash.

The “terrible lesson” of the pre-crash years was the mentality of “if it is not broken, why fix it?”

The economic data masked the fact that a financial crash could cause such difficulties.

Mr Trichet told Senator Sean Barrett that the ECB “learned about the guarantee [in September 2008] through the media. I don’t blame anybody. You have to understand that Ireland was one of the ships in a terribly agitated sea.”

The ECB, he said, did not provide particular advice to the Irish government in the lead-up to the crash in late 2008.

Mr Trichet told Senator Susan O’Keeffe he did not tell Mr Lenihan not to let the Irish banks fail after the crash of Lehman Brothers in the US.

“No message to Brian, no message to the government of Ireland,” he said. “We were telling all governments, don’t do again a Lehman Brothers.”

“I don’t criticise the government of Ireland,” he said, while acknowledging the ECB was critical of it at the time.

“Ireland was aware of the fact that it was very vulnerable and that is the reason why the guarantee was decided.”

On Mr Lenihan, he said: “He did what he thought was the best in absolutely traumatic circumstances.”

Ireland had to be content with a “total collapse” of the Irish banking system, making us the “most vulnerable in the world”, he added.

In response to Fine Gael TD John Paul Phelan, the ex-ECB chief said: “[There was] no pre-discussion of the guarantee of any kind. No call for any dialogue on that.

“The guarantee came. The guarantee is a thunderbolt for many of the [EU] countries. They were shocked that one of the countries was taking an extraordinary decision.”

Mr Trichet responded to Senator Michael D’Arcy about the ECB’s attitude to the State bailouts to Irish banks.

“All of these decisions were decisions of the government of Ireland,” he said.

“We had many countries obliged to sustain some of their institutions by various means. We at the time were supporting Ireland through our own refinancing more than any other country and more of all other advanced economies.

“At the time, [ECB] help to Ireland represented 100 per cent of the GDP of Ireland.

“You have to realise what that means for a central bank to do a multiple of what the Fed [Federal Reserve] did for the United States.

“It was not the responsibility of the ECB to survey the banks. We were relying on the local authorities for surveillance, and possibly governments, in case the drama would unfold.

“Taking the drama that was unfolding, it seems to me that the decision taken in Ireland... [was] probably the best one or the least worst one in dramatic circumstances.”

On whether Anglo Irish Bank’s imminent collapse on the night of the bank guarantee in September 2008 should have been known to the ECB, he answered: “That has to be reflected upon. My working assumption is that the local surveillance authority was thinking they would avoid the drama.

Again addressing the issue of the bank guarantee, he stressed: “The guarantee was not pre-negotiated before, full stop.”

Responding to Fine Gael deputy Eoghan Murphy on the expiry of the bank guarantee in 2010 and why unsecured and unguaranteed bondholders weren’t burned at that time, he said: “In 2010, it seems to me that there was a broad consensus that burden-sharing was a very ill-advised course of action.

“The guarantee was an initiative of the government of Ireland...surprising other governments... not at all a European consensus.

“The overall risk of a new round of financial instability at that moment where the main goal of Ireland was to regain creditworthiness...was to regain trust of savers...was justifying the decision.”

Mr Trichet accepted that he told new coalition government in 2011 that an “economic bomb would go off in Dublin” (Murphy’s term) if Anglo bondholders to the tune of €6 billion were burned.

The ECB, he added, “definitely [did] not” threaten to cut off Ireland’s line of credit if Anglo bondholders were burned at that time. “The decision was not taken by the ECB.”

Fianna Fáil’s Michael McGrath asked what power the ECB had to issue an “unambiguous threat” to the late Brian Lenihan in November 2010 that emergency credit would be cut off if Ireland did not enter its bailout programme.

“No,” Mr Trichet said, adding it was the ECB’s “duty” to express its views. He said at the time the ECB had loaned €140 billion to Ireland, representing 85 per cent of our GDP and one-quarter of the ECB’s overall lending at the time “We had a problem,” he said.

He earlier told Mr Lynch the ECB is only accountable to the European Parliament and so it was not possible for it to participate in national parliamentary inquiries.

“That does not prevent me from talking to you at the present moment,” he said.