Banking inquiry hears EBS was fighting for survival since 2005 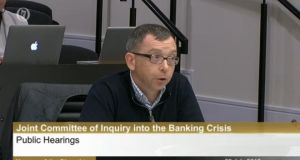 EBS Building Society was fighting for its survival as far back as 2005, according to its former finance director Alan Merriman.

He told the Oireachtas Banking Inquiry that the institution was forced to compete aggressively for business with the main banks or it would have been “gone” as had happened to 20 other building societies in previous years.

“It was clear that the bigger players – which effectively meant everyone else - were able to tap cheaper funding,get greater economies of scale, ride the tiger economy in other very profitable ways outside of mortgages and cross subsidise their mortgage business from other products such as consumer or SME lending,” he said.

“The banks had ready access to capital or international parents willing to invest in the high growth Ireland – and they were winning, or at least EBS was losing as evidenced by EBS’s natural market share steadily eroding bit by bit.

“EBS had effectively little choice but to compete and fight.”

Mr Merriman acknowledged that EBS, which received a State bailout and was merged into AIB in 2011 by the Government, had “failings” but said the “hard truth” was that the “authorities local and European have much to answer for and more so than EBS” in terms of the financial crash in late 2008.

“We fought a good fight…we failed but it wasn’t for the want of trying,” he added.

In response to a question from Senator Susan O’Keeffe, Mr Merriman said the bonus was paid in “early ‘08” but in fact related to the 2007 financial year.

Mr Merriman said he had been “courted” into EBS from PwC where he was a partner and had a “very secure” job and received a good financial package. He was “minded” to protect his income on joining EBS to meets his borrowing and living costs at the time. This included a bonus payment.

“I would have needed that money at that point in time [2008]to cover my own obligations,” he said.

He said the introduction of tracker mortgages in the Irish market was “madness” and he never understood the rationale for them.

“I was always fascinated with the fact that the tracker rate was priced cheaper than the standard variable rate. It made no logical sense to me from any perspective. By a customer having a guarantee that a rate was going to be tied to the ECB[ RATE] when in fact they should be paying more. I just thought it was madness.”

Mr Merriman said he raised this concern at board level and that EBS had “very little” by way of tracker mortgages. “We steered people more towards fixed rate and standard variable rate,” he said.

Mr Merriman said EBS was too reliant on wholesale funding at the time of the crash and its business model had become stretched although he rejected commentary that it was the bank’s exposure to property development lending that resulted in its difficulties.

Mr Merriman joined EBS in 2005 from PricewaterhouseCoopers and knew “pretty much immediately” that EBS was more challenged than he had previously thought.

In 2006, he said management tried to convince the board that considering a partner –whether a mutual or otherwise - may be necessary and changes to legislation to enable this would be sensible and ought to be pursued by the society.

“The Board disagreed. In January 2007 – I advocated strongly to the chairman and CEO that we should accept an offer we had received from AIB to ‘merge’ with EBS – I was in a minority of one and the board did not engage on it with any seriousness,” he said.

Mr Merriman said AIB offered € 700 million and would have involved the EBS brand being retained along with its branch network. He considered this to be “very attractive” but the offer was rejected by the board.

Mr Merriman said his concern at the time was around EBS’s capital position and funding challenges - “what I referred to as a death of 1,000 cuts”.

“In summer 2008, the board, after much heated debate, finally agreed that preserving mutually was unlikely but even then they felt management was too negative on our outlook and the challenges ahead. Clearly matters only got worse.”

Mr Merriman left EBS in March 2009 and said he had not anticipated that the crash would be as “shocking as it got”.

“I sat in many meetings with the Central Bank and the [FINANCIAL]Regulator during 2008 and 2009 and at the highest of levels and can assure you – they assured us – that these issues would pass and we just had to put our heads down and get through it.”

Mr Merriman said that as a domestic mortgage lender, the depth of the recession was such that it was always going to have had a “mortal impact” on EBS.

“Whilst its development finance lending book is often highlighted as what brought EBS down, view this as exaggerated or at best overly simplistic,” he said.

“It is undoubtedly the weight that sank us. But even without it, I believe the same outcome would have been inevitable in that other exposures or business model vulnerabilities would have caught up with EBS one way or the other too.”

Mr Merriman noted that its property development lending was about € 500 million or just 3 per cent of its overall book at the time of the crash.

He is currently a principal with Elkstone Capital International in Dublin.