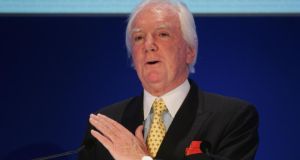 A bank seeking to recover debts from businessman Sir Anthony O’Reilly wants to “humiliate and embarrass” him by requiring he swear a further statement as to his assets and liabilities, the Commercial Court heard.

Bernard Dunleavy SC, for Sir Anthony, said it was “a disreputable application” and should be rejected.

However, Mr Justice Brian McGovern said he would require the 79-year-old, who recently had back surgery in New York, to swear a new affidavit by September 9th after the judge said there was nothing to stop him instructing lawyers and accountants to prepare the information.

The case arises out of AIB’s efforts to recover money owed to it by Mr O’Reilly following a €22.6 million judgment entered against him last June in favour of the bank. His total indebtedness to AIB now stands at around €15 million.

Mr Dunleavy said his client was confined to bed, on painkillers and medical reports presented to court had not been challenged by AIB.

The bank asked the court to order him to swear an affidavit within three weeks but Mr Justice McGovern said he would give him three months.

The judge said in setting the date, he unreservedly accepted Mr O’Reilly was incapacitated and could not travel to this jurisdiction for some time following his surgery.

However, he did not think this prevented him from dealing with the bank’s application for details of his assets and liabilities. This was in circumstances where he has also instructed professionals in the Bahamas, where he has a home, to bring proceedings in relation to an application in the courts there for a personal insolvency arrangement to deal with his debts.

The Bahamian courts were yesterday due to hear an application on behalf of Sir Anthony for a stay on the appointment of a receiver over his assets, Mr Justice McGovern was told.

James Doherty, for AIB, said there was nothing to stop the Irish court making an order that he swear such an affidavit despite the Bahamian proceedings.

This was a normal part of any judgment process and, while it was accepted he could not travel, there was nothing to stop him instructing accountants and lawyers to answer questions in relation to any asset transfers in the last five years.

The bank was seeking clarification of information provided so far but there had been “an extraordinary and remarkable reluctance” by him to swear up as to his assets and liabilities, counsel said.

Mr Doherty said among questions that needed answers was one about Sir Anthony’s artworks valued at around €7.6 million last year but now said to be worth around €1.5 million and are secured in favour of another creditor.

It was simply a question of Sir Anthony “playing the game with the cards facing up on the table”, he said.

Mr Doherty rejected Mr Dunleavy’s claims that this was an attempt to humiliate him as it was just an attempt “to get to the bottom of a complex serious of transactions in various jurisdictions where there is only one person who can say what the position is”.

Earlier, Mr Dunleavy said it was notable that nowhere had it been suggested by AIB that the statement of affairs provided by Sir Anthony was not complete or not genuine.

This entire application arose out of the bank finding out he had shares in Dromoland Castle, but it only found out on the basis on information he provided in that statement of affairs, counsel said.

Mr Dunleavy said he would take instructions on whether to appeal the judge’s order.

1 ‘I’m so lucky to be in the Caribbean – a million miles from Derry Girls’
2 Ryanair expects air fares to fall when flights take off again
3 Tobacco makers still trying to make a mint from Irish menthol market
4 Michael Smurfit: ‘I asked Trump to invite me to the White House for my 80th birthday’
5 Joint accounts: if one of us dies, can the other access the money?
6 ‘The recovery needs to be a full-scale economic renewal’
7 Brexit, coronavirus and bark beetle pose challenges for Coillte
8 Tax and the Pandemic Unemployment Payment: Your questions answered
9 HSBC board rethinks overhaul and seeks even deeper cuts
10 Small businesses are cannon fodder in zealous anti-virus experiment
Real news has value SUBSCRIBE