Distillery has signed up importers in Vietnam and Malaysia, among other countries 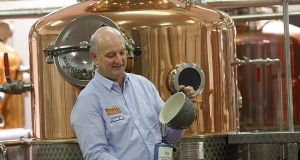 Pat Rigney: ‘When I arrived in Hong Kong the other day, I was hugely proud to see Drumshanbo Gunpowder Irish Gin on the shelves, both for ourselves and for Leitrim’

The owner of Drumshanbo Gunpowder Irish Gin is eyeing expansion into the Asian travel retail market as part of its next phase of growth.

Pat Rigney, founder of the Shed Distillery in Leitrim, said the gin had been available in the duty-free area of Hong Kong’s international airport (the world’s eighth-largest by passenger numbers) since last month. And he now plans to extend this footprint into other parts of Asia.

“The markets that are going to be of interest to us are China, Japan, South Korea, Vietnam and Singapore,” he told The Irish Times on the fringe of the EY Entrepreneur of the Year Awards chief executive retreat.

The company has signed up importers for Vietnam, Malaysia, Singapore and the Philippines. And we have an eye on China, particularly after this visit with EY.

“Gin is a relatively small category in this part of the world but it is growing. What’s exciting for us is that all the travel retail operators know our brand and respect it.

“When I arrived in Hong Kong the other day, I was hugely proud to see Drumshanbo Gunpowder Irish Gin on the shelves, both for ourselves and for Leitrim. They’ve reordered twice from us already. We are very excited about Asia but it is going to be a long-term play.”

“This year we hope to get that to between €7 million and €8 million.”

Mr Rigney is also in the process of adding a visitor centre to his Leitrim distillery, which he hopes to open in a year’s time, following a €2 million investment.

“We hope it will become a destination for ourselves and Co Leitrim. Over time we would hope to get 40,000 or 50,000 a year to build a sustainable visitor project.”

The Shed Distillery is a family-owned company with his wife Denise and his daughter Róisín, who works part time in the business.

Mr Rigney, who has previously been involved in Baileys, Sheridan’s Cream Liqueur and Boru Vodka, also plans to launch a five-year-old Irish whiskey, either late this year or early in 2020. He said the price point will be about €59 with a capacity for about 250,000 bottles a year.

“The consumer is looking for provenance and authenticity, and that’s what we’ll offer. We just need to continue to work hard, stay focused and build our business in the markets that we’re in.”

1 In this strangest of recessions, what happens next for Ireland?
2 Michael O’Leary is the boss you want to lead an airline out of crisis
3 Bank of Ireland sees about 2,000 staff apply for voluntary redundancy
4 Best Covid-19 ‘influencers’ will avoid hectoring
5 Should I switch bank now with Ulster Bank at risk of closing?
6 Fortnite owner signs multimillion deal to buy Irish ‘kidtech’ firm
7 Ireland’s Covid-19 economy in five graphs
8 EY Entrepreneur of the Year: nominee profiles
9 Estée Lauder staff at Dublin airport plan further strike action
10 Ireland is in danger of losing the woods for the trees on emissions reduction
Real news has value SUBSCRIBE