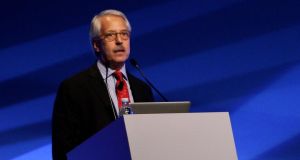 Control and freedom: these two forces are at play during any conversation with Gary Hamel. Finding a balance between them has underpinned much of his work on strategy and management since he first emerged as one of corporate America’s most intuitive business thinkers in the early 1990s.

His working life combines academia with consulting some of the big beasts of the corporate world. He cofounded the Management Lab (MLab), a nonprofit organisation based in Silicon Valley, which aims “to create a setting in which progressive companies and world-renowned management scholars work together to co-create “tomorrow’s best practices” today. “The goal is to radically accelerate the evolution of management knowledge and practice.”

Bureaucracy is Hamel’s obsession. He has spent much of his professional career trying to find a route out of the inefficient structures most of us find ourselves dealing with every day, either as an employee or as a consumer.

To Hamel, the fundamental challenge of 21st century business is to help organisations retain the benefits of bureaucracy with fewer or none of the costs. “Almost all of us have grown up around organisations that fit the bureaucratic template,” says Hamel. “When we touch government, religion, education or our businesses, it’s everywhere. So it’s hard to imagine a radical departure from something that has been so constant in our lifetime.”

Bureaucracy, he says, has endured so long because it worked. The people humping stone to build the pyramids would recognise the working practices of most modern companies, where power and decision making reside at the top, a structure that “disempowers the many and empowers the few”, he says. “It concentrates the job of strategy and direction with a very few people.”

His questions on leadership would stump many well-remunerated chief executives: are you a leader or a bureaucrat? Does your power come from your position in the hierarchy or from the threat of sanction. Or is your influence dependent on the willingness of others to follow you?

The only real way you know you’re a leader, says Hamel, is to start with two assumptions.

“It gives you precision, predictability, stability. That was the problem the management thinkers were trying to solve a hundred years ago. How do we get efficiency at scale? And by golly they succeeded. The fact that we have a car or two in the garage, or we can own something as complex as an iPhone is thanks to them.

“Now we wake up in the 21st century and we face a new set of problems that reside outside the performance envelope of that old model. We still have to be efficient and focused, but you have also to be incredibly adaptable and creative to attract the best talent.

“Bureaucracy gets in the way of all of those things.”

Control and freedom again, banging heads. Look at Intel’s range of new-generation processors, made with a tolerance of 14 nano meters: “The ebola virus is three times as wide. Its unbelievable how much control you need over thousands of variables to produce something as precise as that.”

There remains a large body of opinion that says a flat, open, ground-up organisation can not achieve that sort of control: real life gets in the way of Hamel’s utopian post-bureaucratic vision.

To have innovation, the argument runs, you must encourage freedom – and with it the freedom to argue, to waste time, to lie around in hipster jeans and play pool during the work day.

Such an either/or debate is futile, says Hamel. “Leaders often see these two things – freedom and control – as mutually exclusive. They often say they need to rapidly expand the autonomy of frontline employees. But the push back is that they still have to hit their sales targets and deliver flawless customer service and reliability. There’s an implicit assumption that freedom leads to chaos.”

Cult of the leader

“When I see an organisation going sideways, or missing some new move, it is almost always because the folks at the top failed to write off their own depreciating intellectual capital,” says Hamel.

He points to his work with Nokia in the early 1990s as a case study of how a company is failed by the concentration of power in the hands of a few at the top. “We helped them build their first real strategy in the mobile phone industry,” he says. “It was a breakout strategy and propelled them to number one in the world. Yet the people I worked with in 1993 were 30 years old, and were the same people who were there 20 years later, working with the same models. They had never gone back to revisit that strategy. It was so successful – why would they. They could never write off their own intellectual capital.”

Rather, he says, great leaders separate out which part of their experience is universal and what part of it is “wrapped up in one business model”.

Even Steve Jobs, the great superstar chief executive of the past 30 years missed a few tricks.

“He didn’t think anyone wanted a bigger iPhone. Then came Samsung with their phablets and Apple are now making them. Jobs believed that people wanted to own their own music on their hard drives. Then along came music streaming services like Spotify and we wonder why we need to own anything. So for all Jobs’s brilliance and experience, he had blind spots.”

Jobs’s most underrated attribute was to protect his company’s creative brilliance from Wall Street’s short-termism. Generally, says Hamel, “CEOs get the investors they deserve”.

“You win the confidence of investors when you demonstrate that you can deliver organic growth. On the whole, investors read the leadership of a company pretty well. If I don’t have any track record of reinventing my industry, creating new industries, growing organically; if my reputation is that I can do mergers and take the consolidation gains, slash costs, do the financial engineering, another round of cost-cutting and clean up the portfolio by selling nonperforming parts off; then investors are not going to give you much slack. They will say, ‘Yeah, you go squeeze the lemon, we’ll make the lemonade.’ ”

It’s no surprise Hamel views the financial crisis through the lens of organisational systems.

“The banks knew that whatever they did, their losses were underwritten by the taxpayer. Is it their fault they acted the way they did? I’m not so sure. If I said, ‘You can go to Monte Carlo or Las Vegas and I’ll back all of your losses,’ what would you do? You’d shoot the moon. And that’s what they did. Because they knew they could privatise the gains and socialise the losses. We created the system that was there to be gamed.”

Like the architects of bureaucracy at the turn of the last century, Hamel believes the way we do business can change. “We invented it and we can reinvent it.” Gary Hamel will deliver the keynote address at the IBEC HR leadership summit at the Convention Centre Dublin on Thursday, October 23rd