Worldview considers putting in all cash offer for Petroceltic 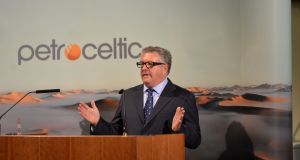 Irish oil and gas exploration firm Petroceltic could be the subject of a takeover by its largest shareholder Worldview.

Irish oil and gas exploration firm Petroceltic could be the subject of a takeover by its largest shareholder Worldview.

Worldview, a private investment management firm incorporated in the Cayman Islands, today said it is in the process of “evaluating and preparing for a possible all cash offer” for the shares in Petroceltic it doesn’t already own.

Worldview already controls shares amounting to a stake of 29.6 per cent in the group. The investment company said “there can be no certainty at this stage that any offer for Petroceltic will ultimately be made”.

In December, Petroceltic effectively put itself up for sale. The Irish group, which has debts of $217.8 million (€199 million), announced a surprise strategic review of its business just before Christmas, admitting in a December 23rd statement that it “does not have certainty on liquidity beyond early January 2016”.

Petroceltoc has oil and gas assets in Algeria, Egypt, Italy and Greece, including the Ain Tsila gas field in Algeria, which the directors believe to be “the principal driver of the long-term future value of the business”.

However, the group has been hit by a collapse in the price of oil, with its shares shedding 77 per cent of their value in 2015, a year that “presented a period of exceptionally challenging market conditions,” it said.