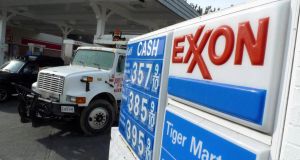 Exxon Mobil: will reduce its share buyback programme in the first quarter by more than half to $1bn. Photograph: Jason Reed/Reuters

Global oil markets are oversupplied at a time when demand is waning, a situation that has caused crude prices to tumble by more than half since June. During the quarter, the average price for benchmark Brent fell 30 per cent from a year earlier.

Exxon said it would reduce its share buyback programme in the first quarter by more than half to $1 billion. In the fourth quarter, Exxon spent $3 billion on share repurchases.

Profit in the fourth quarter fell to $6.57 billion from $8.35 billion in the same quarter a year earlier.

The profits were helped by a $1 billion non-cash credit reflecting the Venezuela award and some US tax effects. The tribunal awarded Exxon the money as compensation for the forced takeover of two oil projects in Venezuela by the country’s socialist government in 2007.

“I think the quality of the earnings beat is questionable,” said Brian Youngberg, an oil analyst at Edward Jones. “Some net tax effects and Venezuela really drove the beat. They remain growth-challenged.”

Oil and natural gas production fell 3.8 per cent, according to the Texas-based Exxon. Shares initially rallied as much as 3 per cent in pre-market trading, then edged slightly lower to be nearly unchanged from Friday’s New York Stock Exchange close of $87.42.

Exxon’s oil and gas production averaged 4 million barrels of oil equivalent per day last year, down 4.9 per cent from 2013.

The drop was principally the result of the loss of the international companies’ oil concession in Abu Dhabi, in which Exxon had a stake, but even excluding that effect, production for the year was down 1.7 per cent. – (Reuters/Copyright The Financial Times Limited 2015)