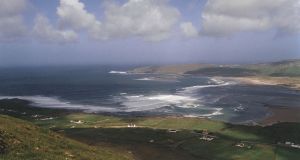 The Supreme Court has found Shell E & P Ireland was acting in civil contempt of court orders when, nine years ago, it entered on to commonage lands at Rossport located on the modified route for the Corrib gas onshore pipeline.

A three-judge Supreme Court on Wednesday overturned as “incorrect” a 2010 High Court finding that a November 2007 order of District Judge Mary Devins prohibiting Shell’s entry onto the commonage, except in accordance with the Gas Act 1976, did not prevent Shell entering on to the commonage after acquiring a 1/62nd share of the land.

Shell acquired the interest in the commonage in May 2008 and went on to it in July and August 2008.

Rossport South resident Monica Muller, a co-owner of the commonage, then applied to have the company held in contempt of the November 2007 order. She claimed Shell should not have entered on to the lands for the purpose of carrying out tests without her consent and without having first applied to Judge Devins to vacate her order.

In September 2009, Judge Devins ruled Shell was in contempt but added she believed her November 2007 order was moot (pointless) given Shell’s acquisition of a share of the commonage. She required Shell to apply to vacate the 2007 order, which was done, and Shell also paid a donation of €3,000 to An Taisce’s planning unit and the legal costs of Ms Muller.

In 2010, the then High Court president, Mr Justice Nicholas Kearns, found the November 2007 order did not absolutely prohibit any entry whatsoever on to the commonage lands by Shell. The order, made under Section 26.4 of the Gas Act, could not prohibit entry by Shell on to the commonage after it acquired a share in the commonage, he also ruled.

The matter was not brought home to the requisite legal standard to justify a finding Shell was guilty of civil contempt, he ruled.

Giving the Supreme Court judgment allowing Ms Muller’s appeal against that decision, Ms Justice Mary Laffoy said, in the context of the factual and procedural background to this matter, Judge Devins was correct in finding Shell in contempt as a result of being in breach of her 2007 prohibition order. The High Court finding Shell was not in contempt was “incorrect”, she ruled.

The acts performed by Shell when it entered on to the lands were acts requiring consent of Ms Muller when the 2007 prohibition order was made, she said. As a result of Ms Muller having invoked the relevant provisions, those were acts prohibited by the 2007 order.

Shell did “much more than mere entry” onto the lands, the judge said. It “clearly entered” for the purpose of carrying out site investigations, works of a type in respect of which Shell clearly considered it required consent of occupiers or co-owners.

Notwithstanding what the High Court had said to the contrary, Judge Devins had held the acts of entry were proved beyond reasonable doubt and were in contempt of the 2007 order, she said.

Those “very clear and unambiguous” findings of Judge Devins were not diluted by the latter’s additional statement, in her case stated to the High Court, that Shell’s purchase of a share in the Rossport commonage rendered the 2007 prohibition order moot. That view of Judge Devins as to mootness was “incorrect”, Ms Justice Laffoy held.

1 State may face €1bn in compensation in Covid-19 case, Press Up claims
2 Karlin Lillington: How I managed to cut my mobile phone bill by at least a half
3 Fiona Reddan: Who’s afraid of Revolut? Not AIB and BOI it seems
4 Lahinch Golf Club runs out of its own cash after €3m Covid-19 hit
5 ECB ‘should wipe Covid crisis debt’ to help nations recover
6 Salesforce in talks to buy Slack in huge cloud software deal
7 Is Coveney the right man to lead Greencore out of Covid-19 crisis?
8 Ireland must beware as digital tax reform enters critical phase
9 Smarter ways to heat your home: Eight of the best modern systems
10 Workhuman predicts double-digit revenue growth for 2020
Real news has value SUBSCRIBE