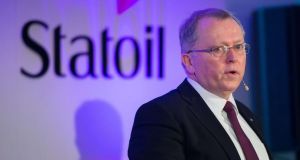 Norwegian oil company Statoil today vowed to protect dividend payments and said it was braced for a long period of depressed crude prices as it set out plans to slash costs and cut investment.

With oil prices falling by more than half since June, oil companies from BP to Chevron have been slashing costs, delaying or cancelling projects and reducing shareholder returns to save cash.

Statoil, which expanded from a North Sea producer to a global explorer during the past decade, will cut capital expenditure by a tenth this year, reducing exploration, spending on its US shale prospects, and modification of mature fields.

But it is moving ahead with projects already sanctioned and will soon unveil plans for the Johan Sverdrup field, which could cost about $30 billion to fully develop, said chief executive Eldar Saetre, appointed to the job on Wednesday.