Petroceltic staff to voice concern over alleged writing down of rights 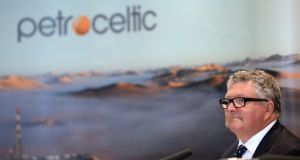 A group of senior staff at Petroceltic International are expected to voice concerns about the alleged writing down of their employment rights in opposing a survival scheme for the company due to be put before the High Court next week for approval.

About 30 senior staff, including senior executives and management, have voted against the proposed scheme at creditors’ meetings.

Under the proposals prepared by examiner Michael McAteer, the staff are due to receive just 5 per cent of monies owed to them under “change of control” clauses in their contracts. They are owed some €3.6 million.

It is expected secured lenders and other creditors will either support the scheme, or adopt a neutral position, when Mr McAteer puts it before the court next Wednesday.

The scheme was due to be put before Mr Justice Brian McGovern on Friday but, due to additional submissions being provided on behalf of Worldview, now its biggest shareholder, and time pressures, the hearing was adjourned to Wednesday.

The judge said, due to the significance of issues being raised in submissions, he may reserve judgment on the application.

Petroceltic is on the verge of being bought by Worldview Capital, a Swiss-Cayman fund previously engaged in a bitter dispute with the energy company’s management.

If the scheme is approved, Worldview will take control of the company for a cash injection of $7.8 million (€6.9m).

The proposed scheme also envisages Petroceltic’s 9,000 shareholders being effectively wiped out for a nominal payment of 31 cent each.

Before the company and two related firms were placed under court protection last March on the petition of Worldview, without notice to Petroceltic, its secured debt of $240.8 million was bought out at a huge discount by Worldview and Elbrus Capital, another Cayman fund.

At a hearing in April to confirm examinership, Rossa Fanning BL, for Petroceltic, said the petition was presented in “somewhat unusual circumstances” but his client was supporting examinership.

He said cricticisms in the petition of the present management of the company were “without justification” for reasons including it could not be held responsible for the oil price collapse.

The survival scheme proposes unsecured creditors, owed $14.6 million, will get a payment of 5 per cent of their debts.

Most of this cash is due to Hess, a multinational oil company with which Petroceltic explored for oil and gas in Kurdistan.

Employees and contractors will get 5 per cent of sums owed and all share options will be eliminated for a nominal payment to each option holder of € 1.

The court previously heard an independent expert’s report expressed the view that Petroceltic has a reasonable prospect of survival as a going concern provided certain conditions, including securing investor funding and approval of a scheme of arrangement, are met.