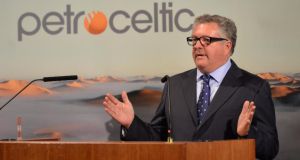 Petroceltic chief executive Brian O’Cathain: his company has accused Worldview, a 29 per cent shareholder, of trying to gain control of the company. Photograph: Sara Freund

Petroceltic International, the Dublin-headquartered oil explorer that is in a major dispute with its biggest shareholder, has called a second egm for the same day next month to discuss a proposal to restrict the rights of the board to sell assets.

Worldview Capital, a 29 per cent shareholder that Petroceltic has accused of trying to gain control of the board, has proposed a motion the company be compelled to seek majority shareholder approval to sell assets worth more than 25 per cent of revenue or profits.

The move by Worldview was a response to a proposed $175 million bond offering by Petroceltic, which was to be secured on its prime gas asset in Algeria. Worldview has calculated that its acquiescence will be needed should Petroceltic ever need to raise equity, which will give it leverage in its row with management. A successful bond issue by the company would lessen the risk that Petroceltic would need to raise equity – and hence have to do a deal with Worldview.

The company recently suspended the bond issue, however, due to “market volatility”.

The shareholder vote called by Worldview will go ahead on September 7th in Dublin, immediately following another separately-called egm at which shareholders will vote on new borrowing powers for directors.