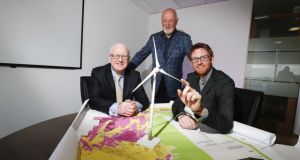 Oriel Windfarm and Gaelectric are to invest €80 million developing an offshore wind farm in the north Irish Sea.

The North Irish Sea Array (NISA) will be the first major offshore renewable energy project to be developed in the Irish Sea since the construction of the Arklow Bank Wind Farm by GE Electricity in 2001.

The renewable energy companies said up to 150 jobs could be created during the construction of the project, with 30 new long term jobs for the North East Region.

“We are confident that the project will attract leading industry players to the offshore Irish market and will be an important step towards realising the vast potential for renewable generation from the Irish Sea,” he said.

The companies said NISA has the potential to produce up to 870 MW of wind energy from the Irish Sea and will commence with the development of a 15 MW demonstration project entailing an investment of €80 million.