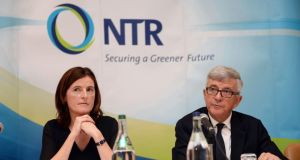 The split, which is subject to High Court approval, will involve a mult-million euro share redemption scheme to facilitate investors wishing to exit the new business.

Under the re-organisation, the company’s toll roads and waste water businesses will be transferred to a new holding company, to be known as Altas Investments.

The new wind energy vehicle, meanwhile, will retain the name NTR, despite dumping its toll road assets, which gave rise to its name originally.

In a statement, the company said 99.9 per cent of shareholders voted to demerge the European wind business from the other parts of the group and for a share redemption at €2.25 per share .

Four resolutions relating to the proposed demerger, a capital reduction and the proposed share redemption were put to shareholders at an Extraordinary General Meeting in Dublin.

As part of the deal, NTR shareholders will be allocated a similar holding in the new wind energy company.

Disgruntled investors One51 and Pageant Holdings, which jointly hold 33 per cent of NTR, have already signalled their intention to take up the redemption offer. It is not clear, what proportion of retail investors, which hold about 25 per cent of the company, will also take up the option.

NTR chairman Thomas Roche and his family, which own hold close to 38 per cent of NTR through their Woodford subsidiary Dreamport, have indicated they do not intend to sell.

A total of €219 million is to be transferred to the new wind company under the plan, which would cover a full shareholder redemption scenario.

Ms McGuckian told The Irish Times the company had a war chest of €170 million for future wind energy acquisitions in Britain and Ireland, including a €120 million from third-party investors.

She also indicated NTR was in “exclusive talks” on number of potential projects.

The holding company, which will retain NTR’s non-wind assets including a 50 per cent stake Celtic Anglican Water, will not undertake any new trading activities, Ms McGuckian said.

A resolution on changing its name to Altas had to be deferred after the Companies Registration Office informed NTR the name was already taken.

As a result, shareholders will have to attend another EGM on October 6th next to vote on changing the name to Altas Investments.

NTR saw profits rise 14 per cent to €35.7 million for the year to the end of March, up €4 million on the previous year.

1 NatWest considers closing Ulster Bank in the Republic
2 Mark Paul: Government faces dilemma on which businesses to save
3 Ulster Bank could close, consumers remain cautious, and Decathlon booms
4 Has NatWest finally run out of patience with Ulster Bank?
5 ‘I just thought it sounded exciting and different’
6 What’s happening with the pandemic unemployment payment?
7 Almost 300,000 customers visited Decathlon since June opening
8 How Ireland managed to green the White House
9 Career path blocked by Covid? Time to take a new direction
10 Cliff Taylor: What permanently low interest rates mean for you as a saver or borrower
Real news has value SUBSCRIBE