NTR first half profit soars after sale of US wind unit 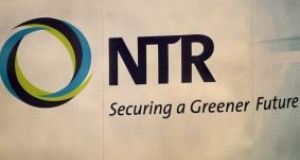 Irish investment group NTR has reported first half profits that are €67.2 million higher than last year on the back of the near €220 million sale of its US wind unit, Wind Capital Group earlier this year.

The company, which is due to complete the spinning out of its European wind energy business on Wednesday, said after-tax profit for the six months to the end of September totalled €72.6 million, as against €5.3 million for the same period a year earlier.

A breakdown of the profit shows that €5.9 million related to continuing operations including currency gains of €6.9 million, while €66.7 million came from the sale of Wing Capital.

The group reported a pretax profit from continuing operations of €4.6 million, as against €3.96 million a year earlier.

Earnings per share for the period was 74.2 cents compared with 5.1 cents for the same period in 2014.

Shareholders’ funds increased by 29 per cent over the six months from €175.4 million to €226.6 million while total assets as of September 30th stood at €280.8 million comprising a mixture of cash and investments in European wind projects.

Cash reserves were €177.1 million, having been augmented by the early receipt of $20 million (€18.1 million) from the sale of the group’s US waste recycling business in 2013.

During the period under review some 42MWs of construction-ready wind projects across Ireland and the UK were acquired and subsequent to the end of September, a further 23MW were acquired or agreements entered into, with additional projects under review and in exclusivity.

NTR announced plans in August for an effective exit for some of its shareholders with a proposal to spin out its European wind assets coupled with an offer to buy its shareholders out of the new unit.

The split, which is due to complete on Wednesday, involves a mult-million euro share redemption scheme to facilitate investors wishing to exit the new business.

Under the re-organisation, the company’s toll roads and waste water businesses will be transferred to a new holding company, to be known as Altas Investments. The new wind energy vehicle, meanwhile, will retain the name NTR.

Some €219.1 million of cash and wind project assets are being transferred as part of the demerger, enabling a share redemption of €2.25 per share to be presented to all shareholders by the demerged company.

The group said the demerged NTR continues to target the fourth quarter to secure third party equity on top of its own commitment of €50 million. The target set by the group is to raise €120 million.

“We are pleased to report a very healthy profit for the group and to be in a position to present shareholders with the opportunity to avail of the share redemption of €2.25 per share, while ensuring that Altas Investments is put on a sound financial footing prior to the demerger. The NTR executives will now move with the demerged business and continue with our plans to acquire, build and operate wind projects across Ireland and the UK,” said chief executive Rosheen McGuckian.