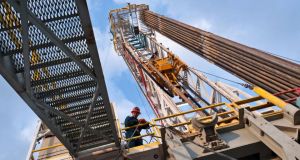 Drilling for oil and gas in the Eagle Ford Shale, one of the US’s top producing shale fields

Noble Energy said yesterday it would acquire Rosetta Resources for about $2 billion in stock, marking it the first significant deal among US shale-oil producers following the steep fall in global crude prices.

A nearly 50 per cent drop in crude prices since June highs of over $100 per barrel has for months raised expectations for mergers and acquisitions in the highly-fragmented shale-oil industry.

However until now buyers and sellers had been unable to agree on valuations and the outlook for prices. With the Noble acquisition a precedent has been set that will clear a path for other companies plotting shale deals, people familiar with the transaction said.

The deal will give Noble entry into two of the US’s top producing shale fields, the Eagle Ford Shale and Permian Bain in Texas. Noble, which is also drilling for gas off Israel, is already pumping oil and gas in other fields, including in Colorado.

The Houston-based company said it had identified more than 1,800 drilling locations across Rosetta’s liquids-rich assets, consisting of 50,000 net acres in the Eagle Ford shale and 56,000 net acres in the Permian. The assets have the potential to produce about 1 billion barrels of oil equivalent and will raise company-wide production 21 per cent, Noble said.

Royal Dutch Shell agreed last month to buy BG Group for about $70 billion in a deal centred around liquefied natural gas. That deal was also seen as paving the way for mergers and acquisitions in the oil sector.

The offer of 0.542 Noble shares for each Rosetta share held represents a 38 per cent premium to Rosetta’s Friday close. The shares had lost nearly two-thirds of their value since June. Noble will also assume Rosetta’s net debt of $1.8 billion as of March 31st.Up to Friday’s close, Noble’s shares had fallen nearly 37 per cent since last June. – (Reuters)