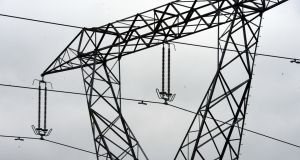 A group of landowners have won their legal challenge to approval being given for a new £200 million (€228 million) cross-Border electricity line.

A group of landowners have won their legal challenge to approval being given for a new £200 million (€228 million) cross-Border electricity line.

The case was conceded at the High Court in Northern Ireland on Friday on the basis that the North-South Interconnector wrongly received the go-ahead in the absence of a minister. Counsel for the Department for Infrastructure asked a judge to quash the permission given so that the planning application can be re-determined.

The outcome represents a victory for up to 6,000 people who own land or live along the proposed route of the pylons and lines.

In January last year the department announced it was approving the Northern Ireland section of the overhead scheme between Tyrone and Meath. But a group formed under the name Safe Electricity A&T (Seat) issued proceedings to claim the move was unlawful.

Their lawyers contended that a development of such regional significance needed to be signed off by a minister. The challenge centred on the legal power of civil servants to take decisions without a functioning executive at Stormont.

In a separate case last year the courts held that a permanent secretary did not have power to approve a £240 million waste incinerator at Mallusk on the outskirts of north Belfast.

Based on that legal interpretation, the department previously accepted Seat had established an arguable case at this stage on the constitutional point. In court on Friday its barrister confirmed that the application for judicial review was no longer being resisted.

A final order reflecting the outcome is expected to be made later this month. The interconnector project could now be plunged into uncertainty, although those behind it remain hopeful that new legislation will enable it to be rubber stamped and advanced.

The overall initiative to join electricity grids in the two jurisdictions has already been approved in the Republic . It involves 85 miles of overhead cables and lead to new pylons being built. Counsel for the department previously stressed the urgency surrounding the scheme, claiming “the lights could go out in 2021 if this project doesn’t proceed”.

Business chiefs have given their backing to the joint project between the System Operator for Northern Ireland (SONI) and EirGrid in the south to reduce costs and ensure electricity supplies. But residents in border areas who objected to the interconnector instead want underground cables for health and environment reasons – an option dismissed as unfeasible.

Seat’s challenge centred on approval for more than 100 towers and high-voltage transmission lines. They also claimed the scheme lacks the scientific certainty required under a habitats directive that no harm will be caused to wildlife.

Outside court the landowners’ lawyer, Paul Farrell of McIvor Farrell Solicitors, expressed delight at the outcome. He said: “It is now clear that such an enormous structural undertaking required political oversight, which in this case was completely lacking. “My clients now hope that this brings an end to the matter.”

SONI emphasised its commitment to delivering the North-South Interconnector, confirmed it will be seeking to have the planning application re-determined, and pledged to work with local communities.

General manager Robin McCormick stressed that its applications met all policy requirements and were approved following a thorough planning and consultation process. He said: “With the introduction of new legislation by the secretary of state in November 2018, which empowers permanent secretaries to take key decisions, we are hopeful that the planning applications can be re-determined without delay.

“The North-South Interconnector remains the most important infrastructure project in Northern Ireland. “When in place it will result in significant savings for consumers, and will help to achieve long-term security of supply.” According to Mr Farrell, however, any fresh applications will be closely monitored. He added: “Our clients are totally opposed to the destruction and blight of their environment, as would be caused by this project.”

1 ‘My rent here is so low it’s a joke’
2 Ashford Castle reopening after $50m makeover by new owner
3 Ashford Castle hotel resort sold for €20m
4 If tourists are such pariahs should we not be testing them on arrival?
5 Can Grafton Street stop the flood of closures?
6 Varadkar to meet banks in row over interest on mortgage payment breaks
7 ‘Sad day’ for House of Ireland as tourism retailer goes out of business
8 Belgium helps Ireland to a Brexit boon
9 New Powerscourt Springs hotel to open in defiance of virus gloom
10 AIB to compensate another 1,100 tracker mortgage holders
Real news has value SUBSCRIBE