Lighting the way into the Republic’s energy market

Gas and electricity supplier Energia plans to enter the Republic this autumn, as a fourth supplier. So what can consumers expect? 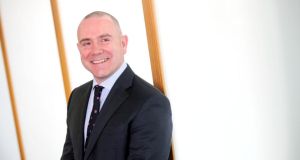 Ian Thom, chief executive of Viridian: “We will want to be competitive against the market. You have got be price competitive, otherwise you won’t get off first base.”

Irish energy group Viridian has an indirect connection with an offbeat bit of legal history. A month ago, part of its biggest shareholder, Bahrain-based Arcapita, successfully emerged from chapter 11 bankruptcy in the US, a corporate rescue process that is akin to examinership in the Republic.

The deal that was agreed with creditors complied with Sharia law, which forbids usury (the charging of interest), and was the first of its kind approved by the US courts.

As it happens, the move had little impact on the Irish company which, according to chief executive Ian Thom, is entirely self-funding.

Arcapita acquired the business seven years ago, but has since syndicated it widely and is now a minority shareholder.

“Our existing investors have been around since 2006 and last year made a significant reinvestment: $120 million,” he says.

“They have always supported us through all the investments that we have done. There’s always been a long history of confidence in Viridian as an organisation and Ireland as a location.”

Part of the chapter 11 deal involved a pledge to dispose of assets in a structured way over time, rather than in a fire sale. It has always been understood that Arcapita would eventually sell the Irish business.

Thom argues that any private organisation is going to have changes in shareholders over time. “But underlying all that is Viridian, which remains a very long-term, committed participant in the Irish energy market,” he stresses.

Thom came to his job at the helm of the energy group via a slightly roundabout route. A Cambridge graduate, he originally qualified as a barrister. After practising for a few years he joined Moy Park – the Craigavon-based home of Irish chicken – as in-house counsel.

That role became head of European legal for US group OSI International when it took over Moy Park. From there, he joined Viridian 13 years ago as company secretary and general counsel, but with a strong commercial brief.

He then took on responsibility for some of its regulated businesses before taking over as chief executive following the sale of its Northern Ireland electricity network to ESB in 2011.

The group he now runs consists of two main divisions. One of them is Power NI, which supplies electricity to 650,000 residential customers and 35,000 businesses in Northern Ireland.

Energia has built a solid position in power supply, with more than a third of the small business market and 20 per cent of large energy users – mainly big companies, hospitals and manufacturers – in the Republic, where it also provides the power for all street lights.

Revenues are €2 billion a year and earnings before tax and write-offs come to €120 million. The group plans to grow by increasing both its own renewable generation capacity and through further deals with independent suppliers.

It has also been named as a possible suitor for Bord Gáis Energy, the State company’s natural gas and electricity supply division, which is on the block with a possible price tag of €1 billion.

Thom agrees that such a deal would be a “compelling strategic proposition” given the fact that the two appear to complement one another.

“Given the stage that the process is at, at the moment, I could not comment further on our potential interest,” he says, adding, “if you want to speculate beyond that, we’ll not contradict you.”

In the more immediate future, Energia is gearing up to enter the domestic market in the Republic this autumn, a move that will see it taking on Bord Gáis.

It will offer both electricity and gas to households here, making it the fourth supplier and bringing with it the promise of increased competition, particularly, according to Thom, on the pricing front.

This marks something of an about-turn for the company. Four years ago, when Bord Gáis and Airtricity were preparing to enter the domestic market and go toe-to-toe with incumbent ESB, Energia hung back, saying it wanted to concentrate on the business market.

So why the change of heart and why now? “We’ve reflected on this over quite a period of time,” Thom says. “We’ve got very good credentials in the domestic market. We’ve got a very good exemplar in the mass market, which is very low cost.

“Throughout the economic cycle, we have managed to avoid large numbers of customer disconnections and yet we have maintained a very low level of bad debt in the business.

“What we have seen here is a relatively disorderly opening up of the market, with lots of people going for market share, losing a lot of money through that process, having a very poor bad-debt experience, disconnecting a lot of customers and causing some reputational damage in the process.”

Problems with customers in arrears have dogged the existing suppliers as the recession deepened over the past four to five years.

The general rate is about 10 per cent, not far off that which applies to mortgages, which is about 12 per cent.

Thom believes the market has settled down, though one thing his company would like to see is greater access to pre-pay meters, which he says have been helpful in controlling arrears in the North.

While Energia will be able to supply these in time, he argues that ESB Networks, which owns the power distribution network, should provide them, allowing consumers to keep their meters, even if they move supplier.

They then become part of the network’s assets and are paid for by the entire market as with all other equipment used to distribute electricity. The group has already discussed this with both the regulator and the Government.

But is it not simply asking the market as a whole to supply a piece of equipment that Energia wants at least some of its customers to have?

“Look, at the end of the day, if the customer wants that piece of kit we will, in due course, be able to supply it to them. That’s a product that we’re probably better set up to deliver, given our heritage, than others would be,” he says.

“We’re just concerned that, for an individual customer, is it the right way to go? It may lock people in to a supplier over a long period of time: they may not have access to discounts, they may actually be the type of customer that can least afford to bear the burden of the extra cost of that piece of hardware.”

The other problem is, if ESB Networks is supplying the meters, does that not give that company an advantage when it comes to recruiting customers?

“It’s ESB Networks as opposed to Electric Ireland. They have appropriate business separation arrangements and they are in the right place to do this as well.”

When it comes to the nuts and bolts of its plans, Thom is keeping his cards very close to his chest. But he stresses that Energia will compete on both price and service.

“We will want to be competitive against the market. You have got be price competitive, otherwise you won’t get off first base,” he says.

“People are very value conscious because of all the other demands that are made on their budgets.”

Energia already has a 37 per cent share of the small and medium-sized business market. Thom says it has built up and maintained this on the back of competing on price and on the quality of service it offers customers.

“We have done some market research with our own customers. They say to us, ‘our experience with you is really good as a supplier, we would really recommend you as a domestic supplier, indeed we’d be very keen to sign up with you ourselves’, so that’s our unique selling point,” he says.

If the group is serious about maintaining a high standard of customer service, it will have to invest in areas such as back-office and customer support. Thom says much of this will be provided jointly by Energia and Power NI.

“We already have a mass-market supply activity and it’s no secret that we have been losing share in the North because of increased competition, but that in itself frees up a degree of resources that can be applied to this without creating another new and significant overhead,” he explains.

Nonetheless, it will be recruiting new people, including 100 or so sales agents, who will be spreading the message door to door.

Along with that, there will be a media campaign and the development of a new website and apps. Gary Ryan, Energia’s Dublin-based head of retail, will be leading the charge.

Thom is not willing to say how much all this will cost, beyond stating the obvious that it will require a significant investment. Neither is he willing to get too hung up on targets.

“We have built up our position in the business market over quite a long period of time,” he says.

“We’re in it for the long term; we’re not going to say, on the basis of one year’s performance, that this or that is not enough customers.

“We address all investments, we think quite intelligently, so we try and maintain as many levers in order to allow us to adjust the level of investment to our performance.

“We haven’t so many sunk costs in this thing that we have a very substantial hurdle that we need to achieve in the first year of operation.”

The point he repeats several times is that the company is in the domestic market for the long term and it intends to carve out a significant slice of that business for itself.

But no matter how significant that slice turns out to be, this is a small market and, of the three existing players, two – Bord Gáis and the Scottish and Southern-owned Airtricity – have invested heavily in building up their position, while the ESB still has a large share. Is there room for a fourth?

Thom’s answer is clear: “We think that there is room for us in the market.”