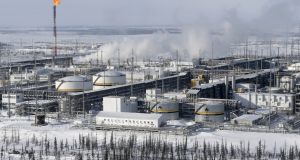 The main Irish unit of Russian state oil giant Rosneft is examining the impact on its business of international sanctions against its Moscow-based parent, the world’s largest oil producer.

Rosneft International – whose registered office is at Molyneux House, Bride Street, Dublin 8 – has filed annual accounts to the Companies Office for the first time since 2012.

While all Irish-registered firms are legally obliged to file annual accounts no later than 11 months after the end of their fiscal year, the filing on February 8th from Rosneft International is for 2013.

Asked to explain the delay in filing, a company representative did not provide a reply.

Rosneft International’s ultimate parent is OJSC Rosneft Oil Company, whose chief executive Igor Sechin is a close ally of president Vladimir Putin. Both the US and the EU have imposed sanctions on the parent company over the Kremlin’s interference in Ukraine.

The Irish entity had loans totalling $395.92 million (€355.37 million) from its parent at the end of 2013, the accounts state. The company’s auditor is Ernst & Young, Waterford, and its banker is Deutche Bank International in Jersey.

“As part of their assessment, the directors are also considering the impact of recent US and EU sanctions,” states the report.

“Based on the assessment performed as of today, the directors did not identify any factors that would impact the company’s going concern status.”

Rosneft International borrows money for Rosneft’s subsidiaries and affiliatiates and lends to them.

The Irish unit incurred a net loss of $22.66 million in 2013 after a $20.76 million writedown of a “non-recoverable” invesment in a Cypriot company called Oxoil, of which it owns 100 per cent.

Amid mounting anxiety among major producers about the drastic reduction in the price of oil, Russia moved with Saudi Arabia yesterday to frame an agreement with Venezuela and Qatar to freeze freeze their output. The accord is subject to Iran, Iraq and other big producers joining the arrangement.