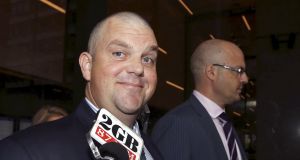 Former Australian billionaire Nathan Tinkler: “I’ve shown I can make money from coal once, and I hope I can do it again.”

Rags-to-riches coal baron Nathan Tinkler, who rode the mining boom to become Australia’s youngest billionaire before losing it all when coal prices collapsed, has been declared legally bankrupt after failing to pay off a private jet.

The bankruptcy order comes 10 years after the 40-year-old scraped together a A$1 million deposit for a rundown coal mine that returned a profit of A$442 million 18 months later.

At that time, coal was at the forefront of a boom in Australian mining, with rising orders from fast-industrialising Asia creating a rush of development and consolidation.

Mr Tinkler quickly parlayed a series of audacious deals into a fortune, far removed from his days as an apprentice at one of BHP’s coal mines, where he is said to have spent much of his free time scouring share prices in newspapers.

He had toyed with the idea of going to university, but felt he would “fail uni [university] the same way I did high school I was just not cut out for hitting the books,” according to a biography by business writer Paddy Manning.

By 2012, the resources boom and Mr Tinkler’s fortune had begun to unravel. As coal prices plummeted, Mr Tinkler was forced to sell an array of assets, including a beloved thoroughbred horse stud as well as professional soccer and rugby teams based in the gritty coal shipping town of Newcastle.

“To be honest, there aren’t that many assets to chase anymore,” John Melluish, Mr Tinkler’s bankruptcy trustee said. “There’s not a lot there.”

Mr Tinkler still owes more than A$300 million to secured creditors, including US hedge fund Farallon Capital and investment bank Credit Suisse, according to statements to the Australian Financial Security Authority.

Both are owed more than A$160 million according to the filing, made on February 25th.

Mr Tinkler told bankruptcy regulators he doesn’t own a car and has no retirement plan. He has A$323,000 in credit card debt and just A$2,000 in cash.

After splashing out big on sports cars, race horses and homes in Hawaii, it was Mr Tinkler’s failure to come up with $2.25 million owed on a Dassault Falcon 900C private jet that tipped him over the edge.

At one stage, the mining mogul was reported to be losing more than A$4 million a day on paper as coal prices tanked and shares in his big stake in Whitehaven Coal plummeted.

A subsequent attempt to take Whitehaven private flopped and he eventually had to surrender his Whitehaven stake to creditors.

In December, Mr Tinkler said he believed he could make a comeback in coal, and said environmental opposition, as much as low coal prices, was hurting his chances.

“I’ve shown I can make money from coal once, and I hope I can do it again,” he said.

In October last year, Mr Tinkler emerged as chief executive of Australian Pacific Coal, which has agreed to acquire the majority of a coal mine from Anglo American.

He was forced to step down four months later under Australian regulations barring bankrupt individuals from holding corporate directorships. – Reuters

1 Why the notion that building more houses will cure our housing woes is bogus
2 Life as a Facebook moderator: ‘People are awful. This is what my job has taught me’
3 Irish companies restrict travel over coronavirus fears
4 Suspicions rife as key Brexit trade talks begin in Brussels
5 Corona beer firm reeling after 8% slide due to coronavirus
6 Coronavirus rocks financial world as hopes for containment fade
7 How well paid do you think you are? Here’s how to work it out
8 ‘The only time apartments were viable was in . . . Ballsbridge, Killiney and Dalkey’
9 Bank leaked my loan request to family who tried to rip me off
10 Airline stocks bear the brunt of Covid-19 volatility
Real news has value SUBSCRIBE