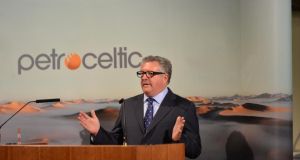 The US owner of blogging service WordPress.com, has been directed by the High Court to identify the author of allegedly defamatory material posted about the Irish-based exploration company, Petroceltic International, and two of its executives.

Automatic Inc, which owns the world’s most popular blogging software, was also ordered by Ms Justice Marie Baker to delete the blogger’s “blatantly untrue” remarks about the company and chief executive Brian O’Cathain and its financial chief Tom Hickey.

Petroceltic International is headquartered in Dublin and barrister Bernadette Quigley, counsel for the company and its two executives, told the court the blogger concerned had threatened to post further allegations on the site.

Barrister Ronan Lupton, counsel for Aut O’Mattic A8C Ireland Limited, a subsidiary of Automatic Inc, told the court his client had not published any any defamatory material on any website and should not be before the court.

Later Judge Baker heard that the US parent company, Automatic Inc, could be joined by consent and it was against this company that the court made its orders.

Ms Quigley asked the court to grant an order restricting reporting of the case but Judge Baker refused. She said she did not think any responsible court reporter would make references to the user name or alleged defamatory material that had been posted on the net.

Mr Lupton said The Irish Times had 14 hours earlier published a story to the effect that his client, Aut O’Mattic A8C Ireland, the Irish unit of Wordpress’s US owner Automatic, was being sued by Petroceltic.

Ms Quigley told the court that nothing had been disclosed to The Irish Times by her side.

Earlier she told the court that the blogger, whose remarks or username are not being reported, obviously had to pay to post the blog and therefore his or her identity had to be known to the owner of the site.

The proceedings were adjourned until September 8th.