Exploration minnow Petroceltic finds itself in the eye of a storm

Where to now for the oil explorer, whose CEO on Wednesday survived a vote to oust him? 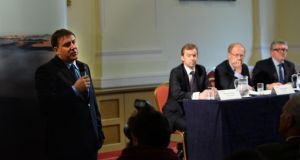 Security was tight in the Royal College of Physicians for Petroceltic’s extraordinary general meeting, called by its biggest shareholder Worldview Capital with the intention of removing chief executive Brian O’Cathain.

Attendees passed through three checkpoints and showed identification to get into the room, whose floor creaked under the weight of sharp-suited lawyers.

“What do you make of all that?” asked one elderly gentleman, munching the free biscuits and motioning towards the security. “I’m a shareholder and I’ve never been asked for ID before. I just have the five shares, mind – I only bought them so I could come to the meetings.”

Which way did this everyman plan to vote? In addition to O’Cathain’s banishment, Swiss-registered Worldview sought to appoint as a director its founder, Angelo Moskov, and another nominee to rival the two nominated by Petroceltic’s board, Nicholas Gay and Neeve Billis. With 9,000 retail shareholders, their votes represented a critical constituency.

“I’m a conservative. I’ll stick with Brian. Sure, what’s the point of going with the devil you don’t know?”

The meeting started quietly enough, with chairman, Robert Adair listing the motions in relation to the various directorial nominees. Notably, Worldview’s existing nominees, Joe Mach and Don Wolcott, were not seated alongside their board colleagues.

Adair ran through, and rejected, the various complaints about company strategy of Worldview, which owns about 28 per cent: alleged poor corporate governance and board composition, delays in developing its Algerian gas asset, “shareholder value destruction”.

Things got decidedly raucous after that. Shareholders began shouting from the floor that it was “outrageous” to be expected to vote without hearing from Worldview, which one man complained was trying “to rob the company from under our feet”.

“Show yourselves,” yelled another.

Richard Clarke, Worldview’s English solicitor and proxy nominee, was the only one from that camp with the automatic right to speak. Perhaps bemused at the idiosyncrasies of Irish public company shareholder meetings, he sheepishly made his way to the front of the room and asked Adair if Moskov might be allowed address shareholders. Adair relented.

The Petroceltic chief executive had last year been leading discussions with Dragon Oil, which was exploring a £500 million takeover of the Irish company. It was aborted in December, prior to a fresh push for revolution by Worldview.

Hugh Gibney, the 76-year old founder of Dragon, was in the room. He gruffly asked Moskov what qualifications he had in relation to oil companies. Moskov reeled off his past positions at Morgan Stanley, Deutsche and Goldman Sachs.

Another elderly gentleman, clearly overcome with emotion at the threat to O’Cathain’s position from perceived outsiders, grabbed the microphone and tearfully begged shareholders not to sack him: “If I want to bollock Brian for his performance, I can take him out for a pint and bollock him. There’s no need for all this. We want home rule!”

The room dissolved into a mixture of rancour and guffaws. Moskov and his colleagues appeared both amused and perplexed at the whole thing. The vote was had and by the middle of the afternoon, the results confirmed O’Cathain is to stay, while Petroceltic’s nominees were appointed ahead of Worldview’s. O’Cathain declared it was time “to move on”.

It is unlikely the war is over, however.

Worldview has made noises about challenging the result of the poll, although one analyst speculated this was simply bravado. Worldview is a financial investor – it has no interest in buying Petroceltic to run it itself. It needs a buyer, either for its stake or for the whole company, in order to turn a profit. The Swiss fund is understood to be planning a waiting game.

Worldview has calculated that Petroceltic will run out of cash, perhaps within the next year, and will have to raise more equity, which the company denies is on the cards. A fund raising would require the co-operation of Worldview, and that this point it would exert its leverage.

There have also been rumours in recent weeks that Dragon, or another potential bidder, may return for another tilt at Petroceltic. A sale would also require Worldview’s acquiescence.

When the Dragon discussions were taking place last year, Worldview never enunciated its position on the potential bid. It is understood that it would likely not have backed a buyout by Dragon at the price range that appeared to be under discussion. If Dragon were to return to scout out a possible bid, it would likely be at an even lower level than before.

Worldview would be the major obstacle to any potential deal, however. It views Petroceltic as a fixer-upper that should be overhauled before it is sold to maximise value, rather than sold as it is. O’Cathain accepts that, while he can now run the company day-to-day without the imprimatur of Worldview, he will need to strike a deal with it at some stage.

“For sure, the time will come. There will come a day when there will be a vote that needs more than a simple majority. I hope we get them on board,” he said.

Taoiseach Moskov, a canny operator who apparently bumped into

Taoiseach Enda Kenny in the Shelbourne bar following the meeting and coaxed him into a photograph that was later tweeted, is unlikely to roll over unless his terms are met. Already, Worldview’s influence is evident in Petroceltic’s affairs.

O’Cathain argues the company was already planning a cost-reduction drive due to the oil price collapse. It also echoes a key demand of Worldview, however. More than 40 per cent of Petroceltic’s head office staff have been made redundant in recent weeks. The company has also announced it will tighten the flow of capital to some of its non-core assets, many of which Worldview wants sold off.

Both sides are still locked in a legal battle in London over allegations that Petroceltic breached a shareholders’ agreement struck last year, which the company denies. O’Cathain called on the company to drop the “frivolous” suit, although as a potential weapon in the war, there is no hint as of yet that Worldview will give it up.

“We just want to get back to normal life,” said O’Cathain. But will it be a new normal?

Once the meeting ended on Wednesday, Adair walked to the back of the room to have a genial chat with the dissidents who had tried to vanquish his chief executive. They all shook hands, and had a chuckle at the shenanigans that had taken place.

A rapprochement would, at this stage, seem unlikely. But if they can capitalise on the clearly cordial personal relations that exist with some board members, perhaps it is not impossible.