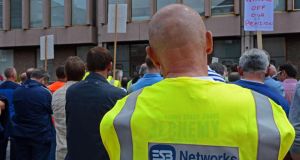 ESB workers gather to voice concerns about their pensions outside the ESB Headquarters in Dublin, recently. Photograph: Eric Luke

The ESB told staff three years ago that the State-owned energy group’s future growth was “linked” to the health of their pension fund.

Some of the group’s staff are threatening legal action over its proposals to pay €478 million in dividends to the State over the next year, on the grounds that this could undermine their pension pot, which has a €1.7 billion deficit.

However, the company says that the retirement scheme is in a position to meet all its liabilities as they fall due.

It also says that a 2010 deal with workers, designed to plug a €2 billion hole in the plan, which included a cut in benefits and a €591 million cash injection from the company, is still on track.

Yesterday it emerged that before this deal was brokered, the then chief executive, Padraig McManus, wrote to staff pointing out that the company’s support for the scheme “remains resolute” and that it was committed to providing solid pensions for its workers.

His letter added that the group’s future growth “is directly linked to the health of the pension fund and vice versa” .

The former chief executive also pointed out that a failure to deal with the €2 billion deficit would impinge on the group’s goal of achieving the best possible credit rating and thus on its ability to borrow money to fund its expansion plans.

The deficit now faced by the plan is a result of legislation passed last year imposing a new “minimum funding standard” which calculates a scheme’s liabilities in the event of it being wound up.

Four staff, part of a larger organisation of active pension fund members, are threatening legal action over the company’s plan to pay an annual dividend of €78 million to the exchequer this year and, pending the sale of some power plants, to make a special payment of €400 million in 2014.

The chair of the pension scheme’s trustees, Tony Donnelly, has also written to the chief executive, Pat O’Doherty, over the possible impact that the special dividend could have on the retirement fund.

Staff and the company are at odds over the ESB’s description of the scheme in its annual report as “defined contribution” and an assertion that it has no liability for any future deficits.

The company believes that this description is in line with accounting standards as the scheme has always had characteristics of both defined contribution and defined benefit plans.

For the same reason, it says that this is why the Pensions Board regards it as a defined benefit scheme.

The ESB changed its definition of the scheme after the 2010 funding plan was agreed, although the unions did not agree to the change.