Complaint upheld in UK about website Ryanair is suing 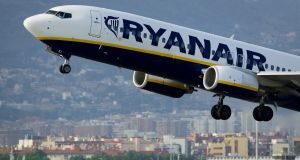 Ryanair asked the aviation authority to intervene after filing its claims against eDreams in the High Court. Photograph: Josep Lago/AFP/Getty Images

A UK watchdog has upheld a complaint of misleading advertising against one of the travel websites Ryanair is suing in the High Court. The airline claims online group eDreams Odigeo is misleading consumers by offering Ryanair flights for sale on its websites without the Irish company’s agreement.

The UK’s Advertising Standards Authority (ASA) recently upheld a complaint against one of the group’s websites, Opodo, which consumers said was offering discounted fares that were only really available to a small number of buyers.

It ruled Opodo had breached provisions of its code covering misleading advertising, qualification and prices, and ordered that the ad should not appear again in the form that prompted the complaints.

Opodo acknowledged its advertisement could suggest a search on its site could result in a method that was the cheapest for them to use rather than the cheapest on the website.

The crux of the complaint was that the prices displayed included a discount available only to those using a pre-paid Entropay card. The final price paid varied according to how consumers paid for their tickets.

The ruling follows news that the UK’s Civil Aviation Authority is investigating eDreams and Opodo pricing practices after the online group failed to address concerns the regulator raised with it over the last year.

Ryanair asked the authority to intervene after filing its claims against eDreams in the High Court. It is seeking damages from eDreams and Google, through which the online travel agent advertises, for infringement of its trademarks and intellectual property rights.