Net profit at State-owned firm falls to €17.3m from €35m despite 6% increase in revenues 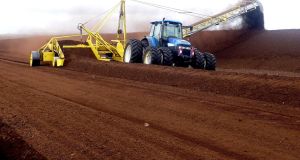 Bord na Móna profits were hit as the group took a €23.6m impairment charge against the carrying value of its two thermal power stations at Edenderry. Photograph: Pat Sammon

Profit at Bord na Móna fell by about 50 per cent in the year to March as it wrote down the value of two power stations in Edenderry and booked loss on the wind-up of its Anua air and water treatment business.

Net profit at the State-owned company fell to €17.3 million from €35 million for the 12 months to March 2015, according to its latest annual report, published on Monday. The company paid a €10.1 million dividend, mainly to the Government, with €500,000 handed over to its employee share-ownership plan.

Revenues at the firm rose by 6 per cent during the year to €432.8 million, as sales in its Mountlucas and Bruckana wind farms increased by €13.8 million in their first full year of operation and waste treatment sales at its Drehid facilities rose by €9.3 million.

“If you went back 10 years, just 2 per cent of the electricity Bord na Móna produced was generated from renewable. Today we are at 48 per cent,” said chief executive Mike Quinn. “Given our pipeline of wind, biomass and other renewable energy projects, by 2020 we know it will be 70 per cent and by 2030 it will be 96 per cent.”

Waste collection sales rose by €4.5 million with an increase in domestic customer numbers and rise in commercial tonnage. But electricity sales by its Edenderry power plant fell by €4.7 million due to a planned extended cut and lower electricity prices.

Profits at the company were dented as the group took a €23.6 million impairment charge against the carrying value of its two thermal power stations at Edenderry.

Bord na Móna, established in 1934, said last year it will see some 60,000 hectares of peat land – mainly across Kildare, Offaly, Westmeath, Longford and Roscommon – now being used to provide energy peat to three power stations, change to new use by 2030. Subsequently, the company will no longer harvest peat for energy and will complete its transition into an alternative energy provider, centred on biomass, wind and solar power.

Coal and briquette sales fell during the year under review due to a mild winter, lower home heating oil prices and increased competition in the fuels market, it said.

The company booked a €7.5 million loss on the closure of its Anua operations.

“During [the year], Bord na Móna spent €7.5 million on research and development (including business development, exclusive of grants),” according to the annual report. “The group is developing new opportunities in areas such as: renewable fuels, smokeless coal, wind and solar farms on our peatlands and opportunities in biomass pellet manufacturing plants.”

At the end of March, Bord na Móna had €242 million of fixed-rate debt raised on the US private placement market. Some 31 per cent of the debt is repayable in the current financial year, with a further 16 per cent maturing next year.