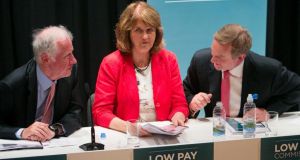 Employers may introduce a “slight adjustment” in the hours they give to workers as a result of the 50 cent increase in the minimum wage, the chairman of the Low Pay Commission has said.

However, Donal de Buitléir said there is no hard evidence to say a reduction in hours given to workers will definitely follow as a result of the increase in the minimum hourly wage from €8.65 to €9.15, which is expected to be ratified in the October budget and take effect from next January.

Mr Kenny said the budget would also contain changes to employer’s PRSI to help offset the cost of the wage increase to businesses.

This was echoed by Mr Bruton, who said the Government will consider the “balanced, measured and very welcome” proposals while also ensuring “that any knock-on impacts are addressed”.

Mr Kenny also said the rise in the minimum wage would be accompanied by taxation measures in the budget, such as reductions in the Universal Social Charge, and welfare changes as part of a Coalition package to “make work pay”.

“This Government believes that a job is the only sustainable route out of poverty, that work should pay more than welfare, and no household with a person in full-time work should be in poverty,” he added.

The report from the Low Pay Commission, published by the Government on Tuesday, said “moderate increases in the national minimum wage are unlikely to have a significant adverse effect on employment (once they do not impact on employers’ PRSI costs), though the position is less clear in relation to hours worked”.

Asked whether employers may cut back on hours given to employees, Mr de Buitléir said: “You may have. There might be slight adjustment in hours but that would be a matter for individual employers. We don’t really have any hard evidence to quantify that. It is a possible and it is flagged as a possibility.”

The increase marks the first announcement from the Low Pay Commission, which will operate over a three-year period.

Ms Burton, who has repeatedly called for a higher living wage, said she saw the 50 cent increase as “the start of a process, not the end”.

Mr Nash said the increase will mean a €1,000 pay rise per year for those on the minimum wage.

Fianna Fáil jobs spokesman Dara Calleary largely welcomed the increase but expressed concern about possible knock-on effects on PRSI paid by workers, although ministers signalled this will also be addressed in the budget.

Sinn Féin senator David Cullinane said the Government should increase the wage by €1.

“A 50 cent increase in the minimum wage will have absolutely no impact on the issue of in-work poverty or on growing inequality in our society,” Mr Cullinane said.

“Sinn Féin have repeatedly called for an initial increase of at least €1 with a guaranteed progression to a living wage over a three to four-year period.”

1 Why are markets booming when a crash is on the way?
2 Could your old car be giving away all your secrets to its new owner?
3 Ryanair passenger traffic slumps 97% as shutdown restricts travel
4 Permission sought for €150m film and media campus in Wicklow
5 Dunnes Stores trials online ordering from Cornelscourt outlet
6 AIB U-turn on mortgage block for those on Covid wage subsidy
7 Vodafone to speed up 5G rollout using new technology
8 Staff at Bewley’s cafe on Grafton Street are made redundant
9 Covid-19: Publicans and restaurateurs row over calls for VAT cuts
10 Paschal Donohoe warns EU against going it alone on digital sales tax
Real news has value SUBSCRIBE