Detroit: let’s not let this discussion get hijacked Greek-style

The city does seem to have had bad governance, but for the most part it was an innocent victim of market forces 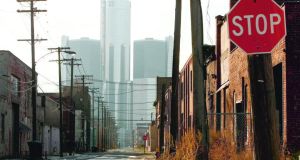 When Detroit declared bankruptcy, or at least tried to – the legal situation has gotten complicated – I know that I wasn’t the only economist to have a sinking feeling about the likely impact on our policy discourse. Was it going to be Greece all over again?

Clearly some people would like to see that happen. So let’s get this conversation headed in the right direction before it’s too late.

Okay, what am I talking about? As you may recall, a few years ago Greece plunged into fiscal crisis. This was a bad thing but should have had limited effects on the rest of the world; the Greek economy is, after all, quite small. Unfortunately, many politicians and policymakers used the Greek crisis to hijack the debate, changing the subject from job creation to fiscal rectitude.

Now, the truth was that Greece was a very special case, holding few if any lessons for wider economic policy – and even in Greece budget deficits were only one piece of the problem. Nonetheless for a while policy discourse across the western world was completely “Hellenized” – everyone was Greece or was about to turn into Greece. And this intellectual wrong turn did huge damage to prospects for economic recovery.

So now the deficit scolds have a new case to misinterpret. Never mind the repeated failure of the predicted US fiscal crisis to materialise, the sharp fall in predicted US debt levels and the way much of the research the scolds used to justify their scolding has been discredited; let’s obsess about municipal budgets and public pension obligations.

Or, actually, let’s not.

Are Detroit’s woes the leading edge of a national public pensions crisis? No. State and local pensions are indeed underfunded, with experts at Boston College putting the total shortfall at $1 trillion. But many governments are taking steps to address the shortfall. These steps aren’t yet sufficient; the Boston College estimates suggest that overall pension contributions this year will be about $25 billion less than they should be. But in a $16 trillion economy, that’s just not a big deal – and even if you make more pessimistic assumptions, as some but not all accountants say you should, it still isn’t a big deal.

So was Detroit just uniquely irresponsible? Again, no. Detroit does seem to have had especially bad governance, but for the most part the city was just an innocent victim of market forces.

What? Market forces have victims? Of course they do. After all, free-market enthusiasts love to quote Joseph Schumpeter about the inevitability of “creative destruction” –- but they and their audiences invariably picture themselves as being the creative destroyers, not the creatively destroyed. Well, guess what: someone always ends up being the modern equivalent of a buggy-whip producer, and it might be you.

Sometimes the losers from economic change are individuals whose skills have become redundant; sometimes they’re companies serving a market niche that no longer exists; and sometimes they’re whole cities that lose their place in the economic ecosystem. Decline happens.

True, in Detroit’s case matters seem to have been made worse by political and social dysfunction. One consequence of this dysfunction has been a severe case of “job sprawl” within the metropolitan area, with jobs fleeing the urban core even when employment in greater Detroit was still rising, and even as other cities were seeing something of a city centre revival.

Fewer than a quarter of the jobs on offer in the Detroit metropolitan area lie within 10 miles of the traditional central business district; in greater Pittsburgh, another former industrial giant whose glory days have passed, the corresponding figure is more than 50 per cent.

And the relative vitality of Pittsburgh’s core may explain why the former steel capital is showing signs of a renaissance, while Detroit just keeps sinking.

So by all means let’s have a discussion about how cities can best manage the transition when their traditional sources of competitive advantage go away. And let’s also have a discussion about our obligations to those of our fellow citizens who have the bad luck of finding themselves living and working in the wrong place at the wrong time – because, as I said, decline happens, and some regional economies will end up shrinking, perhaps drastically, no matter what we do.

The important thing is not to let the discussion get hijacked Greek-style. There are influential people out there who would like you to believe that Detroit’s demise is fundamentally a tale of fiscal irresponsibility and/or greedy public employees. It isn’t. For the most part it’s just one of those things that happens now and then in an ever-changing economy.