What might happen if the UK leaves the EU: The first 100 days 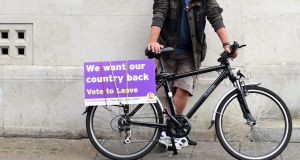 Given the potential political and financial shockwaves surrounding a Brexit vote, it’s not clear a map would do much good. Global markets are already sputtering as anxiety mounts about the impact on the world economy. (Photograph: FACUNDO ARRIZABALAGA/EPA)

There’s no road map for European authorities facing the prospect of a British exit from their 28-nation union - by design.Officials in Brussels are under orders not to commit any scenarios to paper to avoid alarmist leaks, according to a senior official from one European government tasked with making preparations.

Given the potential political and financial shockwaves surrounding a Brexit vote, it’s not clear a map would do much good. Global markets are already sputtering as anxiety mounts about the impact on the world economy. EU President Donald Tusk goes so far as to say that it could spell the end of “western political civilization itself.”

Tusk’s exaggeration highlights the task in self-preservation awaiting European officials as they confront the potential departure of a country from the EU -- something that was inconceivable when the union was established. The mechanism for an exit was only written into law in 2009.

Before dawn on June 24th, if an exit vote becomes clear, the EU’s top brass from Berlin to Brussels will be forced into damage control. In echoes of the Greek debt crisis, euro-area finance ministers may hold an emergency meeting as soon as that evening. Wild swings in the pound, more aggressive interventions by the Swiss National Bank and a ratcheting up of global instability rank as likely market reactions. Currency markets haven’t priced in the UK’s exit from the EU, so if it happens, “a crash is pretty likely,” Lothar Mentel, chief executive officer of Tatton Investment Management in London, said on Bloomberg Television. “We would have to brace ourselves for quite a rough awakening on that Friday.”

The political fallout may be even more fraught. Europe’s traditional counterweights, France and Germany, whose enmity the EU was set up to banish, will seek to gain some of the initiative. They are planning a response as early as June 24th that could include a commitment to deeper euro-area integration as well as a declaration that the EU dream remains alive, according to three people familiar with the plans.

“The European Union will need to have a credible strategy,” said Guntram Wolff, of the Brussels-based policy group Bruegel. “To avoid a gradual disintegration of the EU, political leaders will need to strengthen the attractiveness of the EU and especially the Franco-German alliance.”

As the weekend begins and the reality dawns in the UK that it has voted to leave the world’s largest trading bloc, the rest of Europe will have their own questions to answer. Amid fears that a “Leave” vote could further fuel populist and anti-establishment sentiment throughout Europe, the EU’s leaders could choose to take the unprecedented step of calling an emergency summit without British representation as early as Saturday, June 25th. The reason would be two-fold: send a message to Spanish voters who go to the polls June 26th that the EU remains strong; and to work out what to offer -- or, more likely, what not to offer -- the UK in areas such as free movement of people and access to the EU’s single market. There will be divisions to overcome even without the British. In France, where opinion polls say the eurosceptic National Front may make it through to the runoff in next year’s presidential elections, President Francois Hollande will have cause to show the electorate that leaving the bloc carries negative consequences. Other leaders, such as those of the Netherlands and Denmark, where anti-EU feeling is also growing, may consider it more politically beneficial to offer support to Britain, their traditional ally.Nations outside the euro area, especially those where anti-EU sentiment has been on the rise, such as Hungary, Poland and Sweden, could form a group of countries resisting any French and German attempts to move the EU in a more integrationist direction.

With Britain’s exit, non-euro countries would lose their crucial partner -- they would represent only 14 per cent of the EU’s gross domestic product.David Cameron is scheduled to meet the other 27 EU leaders at a summit in Brussels the following week. It’s at this gathering that the prime minister is likely to trigger the EU’s Article 50 -- the never-before-used law that catapults nations out of the club.That would set a deadline of two years -- until the end of June 2018, during which time the UK would have to negotiate its exit. Will Cameron want the UK to become like Norway or Iceland and maintain a close working relationship with the bloc as part of the European Economic Area? Or could there be another set-up that means the UK would have to trade with the EU under the World Trade Organisation framework?

EU chiefs fear the referendum will spark similar demands across the continent. With elections due in the Netherlands, France and Germany in 2017, there’s reason to discourage others from following the UK’s course, and this could weaken Britain’s hand in negotiations. It could also divert the EU’s attention away from other issues, including Greek finances, the refugee crisis and tackling instability in Ukraine, according to Michael Leigh, senior fellow at the German Marshall Fund.

By this time, the political mist in the UK may be clearing. The EU could find itself dealing with another prime minister -- someone like former London Mayor Boris Johnson, who supported Brexit and whom bookmakers have installed as the favorite to lead the Conservative Party. Whoever it is, the new British leader would probably have to extricate the UK from the EU while facing the prospect of a further referendum, on Scottish independence. The UK would start talks to renegotiate EU agreements in areas as diverse as fishing quotas, financial-services legislation and health and safety standards established over more than 50 years, simultaneously having to start negotiating its own trade deals with the rest of the world. Talks would also have to begin on the relocation of EU bodies headquartered in the UK, such as the European Banking Authority. Each step of the way must be agreed upon by the EU’s other members and the European Parliament, a process lasting at least seven years and with no guarantee of success, EU President Tusk told Germany’s Bild newspaper.”No one can predict the long-term consequences,” Tusk said in the interview. “I fear that Brexit could be the beginning of the end not only of the EU, but of the entire western political civilization”.

1 ‘Saudi Arabia is where the opportunities will happen in future’
2 MSD buys Takeda biologics plant in Dunboyne
3 State’s biggest landlord records 30% rise in rental income
4 Wifi problems? Quick tips to get your home internet out of the slow lane
5 Trump’s TikTok move may have far-reaching consequences
6 Identigen founders make €12m each from sale of company
7 The first seven winners of Business Person of the Month
8 Project to identify spare intensive care beds accelerated by pandemic
9 Profit up 90% at Irish Daily Mail owner
10 Bank of Ireland to charge negative rates on some SME deposits
Real news has value SUBSCRIBE