What does the future have in store for us? 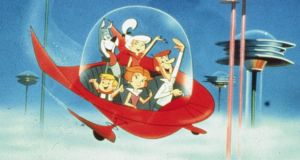 The Jetsons promised us rocket cars, jet packs and robot butlers. Sadly these things did not happen. But there are plenty of other futuristic business ideas that have flourished and others that are blue-skying their way towards us.

Here are a few:

More disruption
Technologists are big fans of the word “disruption”. It’s shorthand for how old ideas, business models, jobs and communities can be swept away by new ideas/a precocious teenager with some computer code.

It’s not just print media and music that are affected by this.

According to Jaron Lanier in his recent book Who Owns the Future?, any industry that uses information technology is due for some internet-enabled disruption in the coming years. Economist Joseph Schumpeter called this phenomenon “creative destruction” – but then that term was “creatively destroyed”.

Disruption/creative destruction is great fun altogether – until it comes to a business near you.

Bigger data
We are not all equal on the internet. You and I are, it turns out, just data serfs servicing information-hungry computer servers. Companies with the processing power (warehouses of servers) to accumulate and organise data are the secret feudal lords in this scenario.

They cut and splice all the lifestyle waffle we generate to impress people on Facebook, then sell it to advertisers without giving us a cent.

Insecure employees
Nowadays we are all individual “brands” in a global marketplace, and collective bargaining is for losers. This approach to labour leads to two strains of worker: a managerial class who sell their work to the highest bidder and are totally “worth it” (bankers, stockbrokers, government advisers); and the rest, who compete by lowering their price.

The yawning economic chasm between the haves (upper class), once-hads (middle class) and never-hads (working class) disguises some very old-fashioned 19th-century class dynamics. But shush! No one has noticed yet.

Campus living
Speaking of the 19th century, Silicon Valley has rediscovered another old Victorian idea: having all your employees live in and around the workplace as much as possible. These tech companies call their workplaces “campuses”, which gives their employees cosy flashbacks to college. It breaks down the boundaries between work and life, enabling HR to more accurately locate and extract the employee’s soul.

Now is the era of casually dressed, counterculturally savvy Ted-talkers, who couple the desire to make money with the need to be loved.

Donning jeans and sports coats, these young ideologues take to the stage to the strains of the latest hits. Then they talk about changing the world while picking your pocket.

Solutionism
“Solutionism” is a word invented by technology writer Evgeny Morozov to describe an increasingly common belief that any problem can be solved by a smart-thinking tech entrepreneur with some coding ability. World poverty? We have an app for that. Global Warming? Check out my Ted Talk. The notion that social problems might, in fact, have slow, incremental and collective solutions? Ridiculous.

More psychology
The economic models of previous decades were predicated on the idea that consumers were rational. More recently, behavioural psychologists such as the Nobel Prize-winning Daniel Kahneman have demonstrated how irrational we really are.

Appreciating the idiocy of crowds is an important new insight. Of course, since the days of PR pioneer Edward Bernays, advertisers instinctively understood the irrationality of consumers.

Now behavioural economists and neuroeconomists are being brought on board to more efficiently manipulate us into buying stuff. Your mother never truly loved you? You’ll enjoy this sandwich so.

More nichification
Thanks to digital technology and the elimination of manufacturing and storage costs, a well-targeted, widely dispersed niche audience can generate as much money as an old-fangled mass market. Some fear this substitution of a shared culture for more individually tailored niche tastes will lead to an apolitical, atomised society. Those people haven’t read my Battlestar Galactica fan fiction.

The battle between globalism and localism
Apparently corporations, products and rich people have no borders. Unfortunately ideas, governments and ordinary humans do. We are also limited by finite resources.

Resolving the contradictions between localism and globalism without having states retreat into protectionism will be the challenge of the next decade.

Appearing to care
Appearing to have ethics is increasingly important for businesses, as their customers become more aware of the supply chain and the devastating consequences of heedless greed.

“Corporate social responsibility” has long been an important part of many companies’ marketing campaigns, but since the financial crash business leaders have sought more convincing ways to look like they give a s**t.

They don’t of course, but they’ll get better at looking like they do.