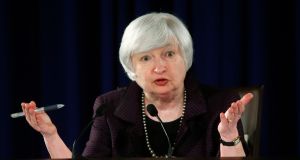 Fed chair Janet Yellen has said the economy needs to create just under 100,000 jobs a month to keep up with growth in the working-age population.

US employment gains surged in February, the clearest sign yet of labour market strength that could further ease fears the economy was heading into recession and allow the Federal Reserve to gradually raise interest rates this year.

Nonfarm payrolls increased by 242,000 jobs last month, the Labour Department said on Friday. The unemployment rate held at an eight-year low of 4.9 per cent even as more people piled into the labour market.

The economy added 30,000 more jobs in December and January than previously reported. The only blemish in the report was a three cent drop in average hourly earnings, but that was mostly because of a calendar quirk.

The employment report added to data such as consumer and business spending, in suggesting the economy had regained momentum after growth slowed to a 1.0 per cent annual rate in the fourth quarter. Growth estimates for the first quarter are around a 2.5 per cent rate.

Fears of a recession in the wake of poor economic reports in December and slowing growth in China sparked a global stock market rout at the start of the year, causing financial market conditions to tighten.

Financial markets have priced out bets of a rate rise at the Fed’s March 15-16 policy meeting and the probabilities for rate increases for the rest of the year remain rather small.

The strong jobs market and improved growth outlook, together with signs that inflation is creeping up, could prompt the US central bank to lift borrowing costs in June. The Fed raised its key overnight interest rate in December for the first time in nearly a decade.

Fed chair Janet Yellen has said the economy needs to create just under 100,000 jobs a month to keep up with growth in the working-age population.

The labor force participation rate, or the share of working-age Americans who are employed or at least looking for a job, increased two-tenths of a percentage point to 62.9 per cent.

While wage growth weakened in February, it was largely payback for January’s jump, which was driven by a calendar quirk. Growth in wages is seen accelerating as the labor market settles into full employment.

The drop in average hourly earnings lowered the year-on-year gain in earnings to 2.2 percent.

In February, job gains were almost broad-based, though manufacturing and mining employment fell. The services sector created 245,000 jobs after adding 153,000 jobs in January. Mining lost a further 18,000 jobs after shedding 9,000 positions in January.

Mining payrolls have declined by 171,000 jobs since peaking in September 2014, with three-fourths of the losses in support activities. More losses are likely after oilfield services provider Halliburton said last month it would cut a further 5,000 jobs because of a prolonged slump in oil prices.