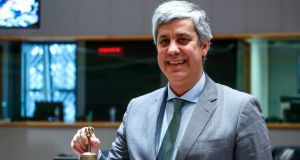 Greece has neared a key milestone in its financial-crisis history, as its creditors started discussing better repayment terms for its bailout loans and a smooth withdrawal of the lifeline keeping the country afloat since 2010.

Euro-area finance ministers meeting in Brussels on Monday tentatively signed off on the latest set of economic overhauls the Greek government legislated, and agreed to disburse €6.7 billion in aid starting in February.

Still, as some of the terms attached to the latest bailout review remain to be completed, the ministers called on Greece to complete outstanding reforms “as a matter of urgency”.

“We have achieved a political agreement on the third review of the ESM [European Stability Mechanism] programme,” said Portuguese finance minister Mario Centeno, who presides over the eurogroup meeting with his counterparts. “This reflects the huge effort and excellent co-operation between the Greek government and the institutions.”

The next slice of concessional loans from the euro area’s crisis-fighting fund will help Athens pay its debt obligations, clear arrears to domestic suppliers and build up a cash buffer after the completion of its €86 billion bailout. It will also further boost investor confidence, paving the way for an imminent bond sale, as the government seeks to prove it has regained full market access ahead of the expiry of its bailout in August.

A key question that looms, however, is what kind of arrangement the country will enter into once it exits its bailout. Greece currently owes its European peers €224 billion, an amount that underpins its creditors’ desire to keep a close eye on the country even after it leaves their direct oversight.

The mechanics of such a surveillance mechanism as well as the type and extent of debt relief Greece will receive at the end of its bailout are set to dominate discussions between the indebted state and its creditors over the next six months.

An analysis of the sustainability of Greece’s debt, drawn up by the European Commission ahead of a January 19th call of euro-area finance ministry deputies and obtained by Bloomberg, foresees a worse trajectory for the country’s debt than what was expected a few months ago.

Meanwhile, Mr Centeno called for candidates to replace European Central Bank vice-president Vitor Constancio, whose term expires in May, kicking off two years of flux at the top of the ECB.

Euro-zone governments can present their candidates until February 7th and euro-zone finance ministers will vote on February 19th. The candidate will then have a hearing in the European Parliament and be appointed by EU leaders.

Spanish economy minister Luis de Guindos is so far the only publicly known candidate and a favourite for the number two job at the ECB. Central Bank governor Philip Lane has also been mentioned in reports as a potential candidate for the role. – Bloomberg and Reuters

1 Coronavirus: Construction sector most significant part of new shutdown
2 British exceptionalism backfires in style as Johnson tests positive for coronavirus
3 Wetherspoon’s panto-villain chairman may have the last laugh
4 Volkswagen burning through €2bn in cash per week
5 UK needs to be honest about its Covid-19 strategy
6 Can husband keep savings and half the house in divorce?
7 Remote working doesn’t suit everyone, and it exposes woolly leadership
8 Retail landlords worried rents will dry up during Covid-19 crisis
9 ECB orders banks to freeze dividends and share buybacks
10 Will Covid-19 force Primark to rethink decision not to sell online?
Real news has value SUBSCRIBE