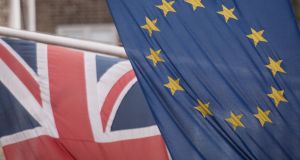 The pro-EU Britain Stronger in Europe group derided the Vote Leave list, saying it included fewer than half of the members of its own advisory council and not a single FTSE 100 chief executive or chairman. Photograph: Stefan Rousseau/PA Wire

One of Britain’s top former bank bosses has joined a group of 250 business leaders who have swung publicly behind the campaign for Britain to leave the EU.

Michael Geoghegan, chief executive of HSBC until 2010, was a surprise inclusion in the group unveiled on Saturday as committed supporters of Vote Leave in its drive to take Britain out of the EU in the June 23rd referendum.

“The UK’s businesses and in particular its financial services sector would thrive outside the EU if the country votes to leave,” Mr Geoghegan told the Financial Times, countering the near anti-Brexit consensus among top City bankers. The only senior serving bank leader to publicly support Brexit is Lord Blackwell, chairman of Lloyds, though he has not signed up to Vote Leave.

Other big names on the list include Tim Martin, chair of JD Wetherspoons, David Ross, founder of Carphone Warehouse and Luke Johnson, chair of Patisserie Valerie.

It also features Pasha Khandaker, president of the Bangladesh Caterers Association, who told the FT that curry house owners were planning a pro-Brexit demonstration outside Parliament in May. “There are too many [IMMIGRANTS ]coming from the EU,” said Mr Khandaker. “We don’t have to be a small province in Europe, we can make our own luck, our own fate.”

Both the Leave and Remain camps are battling to prove they have serious corporate figures on board given that the economy is at the core of the debate ahead of the referendum.

The pro-EU Britain Stronger in Europe group derided the Vote Leave list, saying it included fewer than half of the members of its own advisory council and not a single FTSE 100 chief executive or chairman.

Britain Stronger in Europe recently produced a rival letter with 200 signatories, including 36 chief executives or chairmen of FTSE 100 companies.

Sajid Javid, the business secretary, said; “The evidence is absolutely clear. Every major survey of businesses, large and small, shows a clear majority of firms want to remain in the EU.”

Surveys of business have found a heavier weighting towards Remain, particularly among bigger companies. Many are seeking to stay out of the debate altogether.

Vote Leave hopes that its new list of backers will prove that there is no corporate orthodoxy for staying in the EU. “The EU might be good for big multinationals, but for smaller businesses it acts as a job destruction regulatory machine,” said Matthew Elliott, its chief executive.

A new research note by Barclays has warned that the British economy could contract by 0.7 per cent in 2017 under Brexit. But John Longworth, now chair of the Vote Leave business council, told the FT that the long-term benefits of leaving the EU would outweigh the short-term impact.

“The currency and stock markets will overreact, but they will quickly assess that the real economy is quite sound and we will migrate to a more stable position,” said Mr Longworth, former director-general of the British Chambers of Commerce.

Mr Longworth claimed some of those in the Remain camp were probably seeking government contracts or “gongs” - honours - from Downing Street.