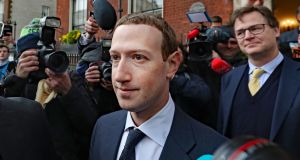 Exchequer returns show the State with a deficit of €966 million for the three months to March 31st, 14.2 per cent less than the shortfall it recorded in the same quarter in 2018. Tax receipts totalled €12.8 billion over the three months, up 7.1 per cent, on the same period last year.

Brexit worries are starting to bite, with confidence among businesses in Ireland’s services sector at its lowest level in 6½ years. And export orders are growing at their slowest rate in 28 months, according to an industry survey. There is some good news, however, with unemployment at a 10-year low of 5.4 per cent.

Fáilte Ireland says it is in talks to assist property developers interested in building large-scale hotels in Dublin of up to 1,000 bedrooms, as the State tourism authority targets more business visitors. Paul Kelly, the authority’s chief executive, says the lack of hotels of such scale within Dublin city is costing the industry “tens of millions of euro” in lost international conferencing business.

One business visitor to Dublin yesterday was Facebook chief executive Mark Zuckerberg. In town on a flying visit he reiterated his call for regulation of the internet in a bid to deal with harmful content online. Mr Zuckerberg was speaking as he visited Facebook’s European headquarters in Dublin’s Silicon Docks, following meetings with Irish politicians on fake news, the regulation of social media, transparency in political advertising and protections for young people and vulnerable adults.

Most Irish small businesses have little interest in significantly scaling despite there being a push to so by the Government. In fact, a new study shows that the majority of so-called micro-businesses start small and stay small with just one in four looking to grow into a national or international business.

In commercial property, the Office of Public Works (OPW) will pay more than €6 million per annum in rent on the Distiller Building. On the south of the city, the well-known Circle K filling station at the entrance to Donnybrook village in Dublin 4 is being sold on the instructions of a receiver for an expected €4 million.

Finally, in her London Briefing column Fiona Walsh reports on the dramatic return of Superdry founder Julian Dunkerton and the resulting exit of the rest of the boardroom. It’s a story fit for a mid-afternoon soap opera.