Swiss move sends world shares into another week of losses 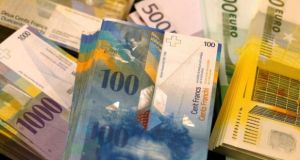 Shockwaves from Switzerland’s move to ditch its currency cap were still being felt on Friday, as investors made a fresh grab for top-rated government bonds, and world shares and commodities headed for another week of losses.

The Swiss franc dipped after Thursday’s surge, but it become the first country to see its 10-year bond yields fall below zero and its shares were again Europe’s worst performers.

Stocks worldwide were limping towards a third week in the red, while Wall Street was expected to decline for a sixth consecutive day for the first time since mid-2012, the height of the euro zone crisis.

Commodity markets were for once an area of relative calm as oil climbed to just below $49 a barrel, safe-haven gold cooled after its best run in 11 months and copper settled after 7 per cent plunge this week.

“It’s not panic but there has been volatility across the board, in FX, in commodities, in bonds and in stocks this week,” said Alvin Tan, a strategist at Societe Generale.

“For a developed G10 currency, the 20 per cent move in the Swiss franc (this week) was extraordinary.” Thursday’s shock Swiss decision to abandon the franc cap and bets the European Central Bank will start buying government bonds with new money as soon as next week combined to keep the euro pinned near an 11-year low against the dollar.

It rose over 4.5 per cent against the Swiss franc, however, after plunging more than 18 percent on Thursday, the biggest daily loss in its history.

Top ECB policymaker Benoit Coeure stoked quantitative easing expectations further, saying the aim would be to anchor long-term financing conditions and restore confidence in the bloc’s inflation target of just under 2 per cent.

His comments came as it was confirmed euro zone prices fell last month for the first time since 2009.

Companies should not use the climate crisis as a scapegoat 05:30
‘The only time I saved money was some coins in my first piggy bank’ 05:20
State-backed Finance Ireland weighs stock market flotation in 2020 04:30
Phil Hogan to address business leaders at IDA event at Davos 04:15
Ireland has fifth-largest number of billionaires per capita in the world, says Oxfam 04:15