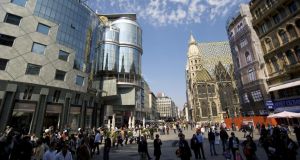 Stephansplatz, Vienna. In economic terms, Austria’s social partnership is often considered a model with the rate of unemployment in the Alpine state never once rising above 5 per cent since 1950. Photograph: Getty Images/Gallo Images

This week there has been much looking back at the 1913 Lockout, the most serious industrial conflict in the history of Irish labour relations. It may, therefore, be opportune to look ahead at how the labour market might be organised in the future; and, more specifically, to ask whether there is a case for reviving social partnership.

Consider the big picture first. Economists looking at the international evidence tend to find that the best employment outcomes are in economies with either strong and effective social partnership systems or those at the other end of the spectrum where a much more free-market approach is taken.

Over the long term in both cases, a high proportion of the adult population works and rates of unemployment are low.

In economic terms, Austria’s social partnership is often considered a model, particularly in how it has contained joblessness. Remarkably, the rate of unemployment in the Alpine state has never once risen above 5 per cent since 1950.

Austrian partnership works because trade unions, employers and governments rigorously agree how competitiveness can be maintained so that high employment and low joblessness are sustained.

Despite a tendency over more than half a century towards corporatist-type arrangements, Ireland’s labour market performance has very clearly not matched that of Austria since 1950.

Social partnership’s most recent incarnation came into being during the last major economic crisis in the 1980s. The Programme for National Recovery, agreed in 1987, is almost universally cited as an important factor in exiting the long slump of that decade. The 1987 deal and a number of its successors were similar to the Austrian model in some important respects, most notably in how they focused on boosting employment growth by achieving competitiveness gains.

Over time, however, Ireland’s social model lost its Austrian rigour. As the good times rolled from the late 1990s, it became a mechanism for governments to buy off interest groups. Instead of being a forum in which a robust consensus could be forged to tackle long-term problems, it became club of insiders who looked after their own interests and paid limited attention to those on the outside.

Workless households
Nothing illustrated this better than the extent of hidden unemployment which pertained even at the height of the boom. As of 2007, after more than a decade of enormous growth in jobs, Ireland had the second-highest rate of workless households out of 31 European countries.

Social partnership structures ignored the problem. Nor can anyone claim that there was any lack of knowledge of it.

Paul Tansey, who, among many other roles during a life abruptly cut short five years ago, was economics editor of this newspaper. He wrote the following in 1998 “for the long-term unemployed, counselling, advice and the fashioning of individual pathways back to education, training and the workforce offer the best, and perhaps the last, hope of preventing the emergence of a permanent underclass”. None of those things happened during the years of plenty even though the resources existed to modernise the systems of education, training, welfare and activation. A large workless underclass now exists and there is limited political will and less money to help and propel people out of that condition.

If partnership did not work during the good times, when bad times came it proved as fragile as the property bubble.

Why did social partnership fail so badly? While none of the vested interest who got a place at the partnership table can be proud of the mechanism’s descent into an elaborate patronage mechanism, it is hard to ascribe to them a great deal of blame. Representative groups’ reason for being, after all, is to get as much as they can for those they represent. Most of the blame must lie with those who chaired partnership – political leaders.

Where social partnership works, governments prevent vested interests from “capturing” the process and use it as a mechanism to build consensus and ensure buy-in by interest groups. It is a means to achieving well-thought-through strategic ends.

Inept strategists
But Ireland’s political institutions have shown time and again over many decades – not least in how they have allowed the economy to crash on three separate occasions – that their capacity for strategic thinking and proactively addressing problems is severely limited.