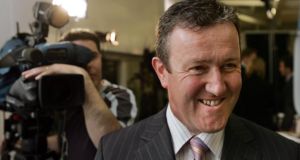 Sinn Féin’s Conor Murphy: “This budget will usher in billions of further cuts targeted against the most vulnerable in society.”

The two parties most fiercely opposed to the current welfare arrangements in Northern Ireland, Sinn Fein and the SDLP, have issued scathing responses to British chancellor George Osborne’s budget.

Northern Ireland politics is already caught in a logjam because of Sinn Fein and SDLP opposition to British government welfare reform.

Their refusal to sign up to the previous welfare changes has meant DUP Finance Minister Arlene Foster bringing in a provisional or so-called “fantasy” budget which is likely to face what the Minister has described as an “unsustainable” £600 million shortfall in the autumn.

The hope was that before that crisis point was reached that a compromise over welfare might be achieved that might allow the full implementation of the Stormont House Agreement, including its welfare elements.

Mr Osborne in his budget made only passing reference to the Stormont House Agreement which, as well as welfare changes, promises the Northern Executive £2 billion in grants and loan-raising powers in the coming years. He said it was “critical” that the Northern parties press ahead with the agreement to aid economic recovery in Northern Ireland.

Sinn Féin Assembly Member Conor Murphy however emphasised his party’s opposition to the additional welfare proposals in Mr Osborne’s budget. “This budget will usher in billions of further cuts targeted against the most vulnerable in society,” he said.

“We have seen a £12 billion reduction in welfare payments with a further £20 billion cuts to public services flagged up. These latest cuts announced today are coming on top of the Tories’ slashing of £1.5 billion from the block grant and would take millions more out of the local economy,” he added.

“George Osborne and his millionaire cabinet colleagues appear intent on driving thousands of families here deeper into poverty and attack those on low and middle incomes.

SDLP deputy leader Dolores Kelly said the budget was the “first shot in a class war waged by the Conservatives that will deepen poverty and hurt low income families”.

“I watched George Osborne stand at the dispatch box in the House of Commons acting like some modern day Sheriff of Nottingham, robbing from the poorest to sustain hand outs to the rich. This is a poverty budget that offers nothing for low income working families and disproportionately targets those already struggling most,” she added.

The new Ulster Unionist Party MP for South Antrim Danny Kinahan welcomed aspects of the budget such as extra money for the NHS and the lowering of corporation tax but said that more detail was needed on how many families would be affected by the lowering of the benefit cap to £20,000. He also called on Sinn Fein to “stop stalling on Welfare Reform.