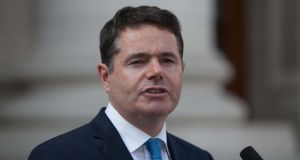 Minister for Public Expenditure and Reform Paschal Donohoe: Insists the fiscal space available for the budget will be divided on a 2:1 ratio between public spending increases and tax cuts. Photograph: Gareth Chaney Collins

Each of the twin architects of the budget – Minister for Public Expenditure Paschal Donohoe and Minister for Finance Michael Noonan – appeared before the newly formed Budget Oversight Committee this week. The committee is meant to be one of the ways in which the Oireachtas becomes involved in the process of drawing up the budget rather than just approving it after it is presented. It is meant to bring the budget process out from behind closed doors.

But the Ministers were met with predictable requests from TDs, and neither man gave much away. Meanwhile, the real process continues in private, where ministers haggle on behalf of their departments, and interest groups muscle for favours.

The reform of the process is only beginning, of course. By next year, an independent Oireachtas budget office will be in place, allowing TDs to have proposals – their own and the Government’s – evaluated. Perhaps it will be different then.

But for now, there is little change in the fundamentals of the process.

Donohoe told TDs there will be no increase in the €1 billion of fiscal space before the budget and Government departments will not be bailed out at the end of the year with extra cash.

Faced with many suggestions for increased spending from committee members, the public expenditure minister maintained his hard line on spending increases, repeatedly insisting that, while all the requests were justifiable in themselves, he had to reconcile them with the need to stay within expenditure targets laid down by the EU’s fiscal rules.

Donohoe insisted that the fiscal space available for the budget will be divided on a 2:1 ratio between public spending increases and tax cuts. For its part, the Fiscal Advisory Council estimates the overall size of the budget package will be some €2.4 billion, when increases in spending for 2017 that have already been committed are included.

Committee members peppered the Minister with suggestions and requests for extra spending in a host of areas.

Green leader Eamon Ryan said more funding should be devoted to public transport and promoting cycling and walking. Fianna Fáil TD Lisa Chambers said there was a need for extra funding for third-level education, while Joan Burton called for more funding for childcare and for school construction, which was being “long-fingered”, she said.

Stephen Donnelly outlined a number of areas that, he said, the Minister should consider for additional resources – voluntary sector workers needed pay restoration, he said, funding for the arts should be maintained and small business supports should be enhanced in the light of the Brexit referendum.

Mr Donnelly’s suggestion that arts funding should be protected drew significant support from other committee members, but Donohoe pointed out that special funding of €50 million was made available this year for 1916 commemorations by the arts sector.

“Of course the arts community want to keep the €50 million next year, of course they do. But I have to reconcile all the other demands before me,” he said.

Richard Boyd-Barrett of People before Profit said failure to spend in certain areas – housing, third-level education and forestry were examples he gave – was “not prudent, it’s stupid. “It’s a stupidity being imposed on us by the fiscal rules.”

Donohoe’s answers remained largely the same: these are all good ideas, but he has to make them all fit into the fiscal space of available resources. And that, he indicated, would be completely impossible. Last week The Irish Times reported that Donohoe had told the cabinet that the aggregate requests for new funding from his cabinet colleagues for next year had hit the €3 billion mark.

The previous day, Michael Noonan was happy to outline, as he had done before, the parameters within which he must work. But as to specifics, we will have to wait until budget day.

He gave little away over the course of almost three hours at the committee. With a bit in excess of €300 million to spend on tax cuts (though some Department of Finance sources believe it will be €400 million by the time he’s finished), Noonan must juggle competing demands for cuts in USC, inheritance tax (a must for the Fine Gael grassroots, especially in Dublin), the equalisation of tax treatment for the self-employed (ditto), and some form of assistance for first-time buyers.

This last seems the most fraught. Noonan suggested yesterday that providing help to first-time buyers will stimulate demand, and therefore supply. But there are nerves about this approach right through the policymaking apparatus among those who fear a return to the rapid inflation in house prices of the past.

But whatever else, it seems clear that the budget will mark a retreat from the pre-election spending of last year.

Noonan and his then public expenditure partner Brendan Howlin effectively doubled the size of the budget by loading extra spending into the 2015 budgets at the end of the year. Both Noonan and Donohoe insisted this week that there will be – and can be – no reprise of that.

Perhaps notably, Noonan’s sharpest contribution to the meeting came when he attacked Sinn Féin finance spokesman Pearse Doherty, who had criticised previous Fianna Fáil ministers for finance. Noonan bared his fangs and told him his associates in Sinn Féin and the IRA had made a pretty good attempt to ruin two economies, North and South.

Noonan and Donohoe have already begun budgetary negotiations with their Fianna Fáil counterparts, a process that is expected to move to a more formal, bilateral stage next week. Fianna Fáil’s agreement, of course, is necessary for the budget to pass at all. Needless to say, those talks will be held behind closed doors.

1 My aunt never told us that Gran passed away with no will
2 Ryanair to slash 1,000 flights from August and September schedules
3 The $6bn judgment pitting Nigeria against Irish businessmen
4 Green Party TD queries ‘usefulness’ of another appeal in €13bn Apple tax case
5 If it’s safe to do so, could this be the time to spend for Ireland?
6 Burger King to sell whoppers from cows that belch out less methane
7 Government to push through €2bn credit guarantee scheme next week
8 Majority of employees don’t want to return to pre-Covid working patterns
9 UK to purge Huawei from 5G by 2027, angering China
10 Costs and borrowing rules locking a generation out of home ownership, builder warns
Real news has value SUBSCRIBE