Deficit narrows in first five months of 2013 ; spending broadly in line with projections 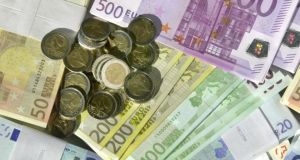 Tax revenues in the first five months of the year were slightly ahead of Government expectations. Photograph: Alan Betson/The Irish Times

Tax revenues in the first five months of the year were slightly ahead of Government expectations, while non-tax revenue was more than €1 billion higher, mainly owing to larger than planned payments by banks for now expired State guarantees.

The monthly exchequer returns published by the Department of Finance show that tax revenues, including social insurance contributions, stood at just over €19bn in the January-May period. Non-tax revenues for the same period amounted to just over €4.4 billion.

The Department noted that the the over-performance “is due in part to timing issues related to Property Tax receipts. Adjusting for these receipts, tax revenues are broadly in line with expectations after five months”.

Income tax - the Government’s largest single source of revenue - was on target in the month of May, recording a small surplus of €4 million against a monthly target of €1,075 million. Cumulatively, income tax receipts were €55 million , or 0.9 per cent, below profile in the first five months of the year.

Value Added Tax - the second large revenue source - was virtually on target in May,recording a marginal shortfall of €12 million against a target of €1.5 billion. VAT receipts in the five months to May were €117 million, or 2.3 per cent, behind target.

PRSI receipts, at just over €3 billion, were marginally ahead of target in the same period.

On the spending side, net voted expenditure to end-May stood at €17.7 billion, which was €385 million, or 2.1 per cent below the target contained in the April Revised Estimates Volume. This represents a year-on-year decrease of €1,127 million, or 6 per cent.

Of the 16 departmental vote groups, 13 recorded a year-on-year decrease in spending, including all four of the largest spending departments (Social Protection, Health, Education and Justice).

Interest costs on servicing the national debt, stood at €3.6 billion in the five months to end-May. This was one tenth higher than the corresponding period last year. The year-on-year increase is reflective of the increase in stock of the national debt.

The overall Exchequer deficit fell to €5.3 billion as oft end-May. That represented a narrowing of more than €1.2 billion compared to the first five months of 2012.

1 ‘Saudi Arabia is where the opportunities will happen in future’
2 Restaurant bears, WFH love and Microsoft’s acquisition history
3 Nokia timeline
4 How to succeed as an innovator – without the hype
5 Dubliner modernising the city of Palo Alto
6 Trump’s TikTok move may have far-reaching consequences
7 Another trade war is brewing, this time between France and the US
8 How safe is it to go back to the office?
9 Scars from the crash give Irish banks 2.6 billion reasons for Covid caution
10 Ten of the most mysterious aircraft disappearances
Real news has value SUBSCRIBE