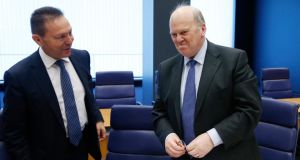 Euro group finance ministers have agreed to consider retro-active recapitalisation of banks on a case-by-case basis.

The news represents a positive step for Ireland’s campaign to recoup some of the funds it put into AIB and Bank of Ireland in the wake of the banking crash.

Following a meeting of euro area finance ministers in Luxembourg tonight, Minister for Finance Michael Noonan said: “What we’ve got tonight is an agreement that the framework under which the European Stability Mechanism (ESM) will operate will have the potential of directly recapitalising banks on a case-by-case basis.”

Observers said, however, it may take up to a year before the Irish case is considered and even then it is likely to face resistance from some member states.

A number of member states, including Germany, the Netherlands and Finland, are strongly opposed to the principle of ‘retroactivity’ whereby the fund would be used to retrospectively directly recapitalise banks.

Earlier, Mr Noonan insisted Ireland was “an exceptional case” and should be granted retro-active recapitalisation by the ESM.

Mr Noonan’s comments came despite warnings from German finance minister Wolfgang Schauble that the fund has “no great leeway” to fund banks that have already been recapitalised.

Pointing out that the ECB had forced Ireland into a position where it was not permitted to bail-in senior bondholders, Mr Noonan said the ESM fund was not available to Ireland two years ago. “That’s our case for retrospective application,” he said.

Asked on his way into this afternoon’s meeting of euro zone finance ministers about the fund’s capacity to retroactively directly recapitalise, Mr Schauble said there was “no great leeway” for the mechanism. “It makes no sense to raise false expectations,” he said. “That only leads to disappointment in markets.”

His comments were echoed by the Dutch state secretary for finance Frans Weekers. “It is possible we discuss retroactive use of direct recap,” he said. “The Netherlands is not in favour of that. There are different thoughts about this.”

As the largest contributor to the ESM fund, Germany has an effective veto over any decision on recapitalisation. EU sources in Luxembourg this afternoon suggested that there was likely to be a broad agreement to examine retroactivity on a case-by-case basis, but any decision would need unanimity. This would push a decision on Ireland’s request for retrospective recapitalisation of AIB and Bank of Ireland into the end of next year, when the banking recovery and resolution directive is up and running.

Speaking on his way into the eurogroup meeting - the last under the Irish presidency of the council of the European Union - Mr Noonan said his German counterpart’s comments did not rule out the possibility of retroactivity. “If there’s leeway, there’s leeway,” he said, adding that Ireland had been forced by the ECB not to bail-in senior bondholders during the Irish bailout.

“We’re saying that we were forced into a position by the ECB where we weren’t allowed bail-in senior bondholders. If the ESM rules that are now emerging were in place two years ago when we recapitalised the banks, the ESM would have assisted in the recapitalisation. And that’s our case for retrospective application. I agree with Wolfgang, the scope is narrow, because there aren’t other countries that were refused to do something as a policy issue which is now being advocated.”

The Minister for Finance said securing further debt relief was not so much a question of Ireland’s debt sustainability, as essential for economic growth. “We’ve brought the debt into the position now that there’s national recognition that the Irish debt position is sustainable, so what I’d like if we could avail of retrospective recapitalisation in one way or another, would be to relieve the burden on Ireland which is inhibiting our growth rates.”

Earlier, Taoiseach Enda Kenny said he would discuss the issue with Chancellor Angela Merkel at a Vienna meeting of the European People’s Party today, as their finance ministers debated the so-called banking union in Luxembourg. “The banking union concept is a credibility test for the European Council, ” he said. “There isn’t any real point in shirking from the decision that was made.”

A year ago EU leaders agreed in Brussels to bank recapitalisations and to break the link between sovereign and banking debt.

Asked about the political consequences of further delay for Germany and other countries less enthusiastic about bank recapitalisations, Mr Kenny said this would be a “poor signal for credibilty and trust”.

“The decision was made by everybody, the point now is to implement it and make it work,” he said. “Citizens like to see leaders follow through and implement decisions.”

Signals ahead of today’s euro zone finance ministers’ meeting in Luxembourg was that a definitive decision on the issue of retroactivity could be delayed until the autumn of next year.

Even if finance ministers agree to consider some form of retroactive direct recapitalisation, no specific decision for Ireland is likely before autumn 2014 at the earliest.

Direct bank recapitalisation by the ESM bailout fund will, in turn, only become possible once the banking union is in place, comprising a bank wind-up mechanism and a single banking supervisor.

While euro zone finance ministers could give blanket agreement to the principle of retroactive direct recapitalisation of banks at today’s meeting, resistance to the concept of retroactivity has been intensifying in Brussels and Berlin in recent months.

German officials said they saw no chance of using the ESM bailout fund to recapitalise banks rescued with Irish taxpayer money at the height of the crisis.

On the October budget, Mr Kenny expressed optimism that extra room to maneouvre in public finances would allow flexibility in department spending.

“Ministers have indicated clearly that, where flexibility can be shown, that it should be pumped into public infrastructure like schools and primary care centres,” he said. “In other words (areas) where jobs can be created clearly. It is in that space that confidence reutrns and people can feel and see that things are beginning to move in the right direction.”

In its most recent programme progress report, it urged the Government to use the money saved from scrapping the Anglo Irish promissory notes earlier this year to build up a financial buffer against economic shocks.

However, Labour has been increasing pressure to use the proceeds to ease the planned retrenchment rate next year. Fine Gael Minister for Jobs, Enterprise and Innovation Richard Bruton had called for tax cuts where necessary to sustain economic recovery.

However, Mr Noonan has been adamant there should be no reduction in the €3.1 billion budget consolidation for next year.

1 Tax and the Pandemic Unemployment Payment: Your questions answered
2 Charlie Chawke plans 290 apartments and hotel on Goat pub site
3 Four things that could help Ireland escape from the Covid-19 recession
4 Row over ownership of Fota Island resort comes before High Court
5 Brown Thomas and Arnotts shoppers will be able to book time slots for entry
6 Revenue fears fraudsters tapped bank details of 3,000 taxpayers
7 College of Surgeons faces legal challenge to Na Fianna GAA contract
8 O’Leary casts unwelcome light on a very Irish political compromise
9 Enforcement proves the Achilles heel for GDPR
10 Joint accounts: if one of us dies, can the other access the money?
Real news has value SUBSCRIBE