Pretax profit falls 64% to $475.6m at Dublin-based unit of Citibank 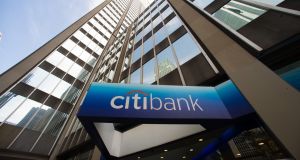 Pretax profit at Citibank’s Irish-based European unit last year more than halved to $475.69 million (€401.34 million) due to the impact of the Covid-19 pandemic.

New accounts show that pretax profit declined by 64 per cent after total income decreased by 10.4 per cent from $2.47 billion to $2.2 billion in the 12 months to the end of December last.

Limerick woman Cecilia Ronan was appointed as chief executive of Citibank Europe in February 2020. The business employs 10,238, including about 2,500 employed in the State.

The directors said “the company’s businesses, operations and financial condition have been impacted by economic dislocations and trends caused by the pandemic”.

Despite these impacts, the business reported a post-tax profit of $443 million for 2020 “and has maintained strong capital and liquidity positions with consistently strong business operations”, they said.

The business is headquartered in Dublin and has branches across 21 European countries.

The directors said the consideration to pay dividends in relation to 2020 earnings would be kept under review in 2021 in light of uncertainties created by Covid-19 and regulators’ recommendations and would be finalised later in the year. No dividend was paid in 2020 on 2019 earnings.

The company’s total assets increased by $12.6 billion to $74 billion at year end.

Growth was led by its markets and securities services businesses due to successful Brexit-led transitions and portfolio build-up in derivatives flow trading, as well as increased financing across financial institutions and corporate customers.

The bank recorded post-tax profit of $443 million after paying corporation tax of $32.59 million.

The accounts further show that 10 members of key management personnel shared remuneration of $11.76 million, made up of salaries of $11.2 million and post-employment benefits of $567,000.

Citibank Europe’s total assets of $74.7 billion at the end of December last included $19.9 billion in cash.

The directors state that the reduction in net operating income to $1.7 billion was due to a decrease in transaction volumes through the payment and commercial cards business mirroring the wider contraction in the global economy.

This was coupled with reduced interest income from compressed rates across the United States and Europe.