Political and banking laxity at root of Irish bailout 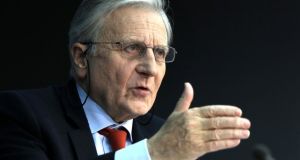 Former EU commissioner Ray MacSharry writes in the book that Brian Lenihan received tacit approval from then ECB chief Jean-Claude Trichet (above) to burn big bondholders, only to see Trichet change his mind within hours because he realised large banks in Germany and France would be prime casualties. Photograph: Bloomberg

A new book on the late Brian Lenihan has cast fresh light on the tumult leading to the EU-IMF bailout four years ago.

At issue – yet again – is the ever-vexed question of whether Ireland should have imposed losses on senior bank bondholders at the outset of the rescue, as Lenihan wished to do but which was blocked by the European Central Bank.

Former finance minister and EU commissioner Ray MacSharry writes in the book that Lenihan received tacit approval from then ECB chief Jean-Claude Trichet to burn big bondholders, only to see Trichet change his mind within hours because he realised large banks in Germany and France would be prime casualties.

This is firmly at odds with the established narrative of those days, which has it that Trichet was so resolutely opposed to bondholder losses that he threatened there and then to cut off ECB life support for Ireland’s financial system.

This was an appalling edict to issue to a sovereign state, although it rather sums up the extent to which sovereignty was surrendered as Ireland veered towards the precipice.

It was but weeks after German chancellor Angela Merkel and then French president Nicolas Sarkozy declared at Deauville that they would compel investors to bear losses in future bailouts. This infuriated Trichet, who was fearful of contagion. At a summit days later in Brussels there was talk of a shouting match between Trichet and Sarkozy.

The plan from early on was to conserve Bank of Ireland and AIB as pillar banks, so any risk to senior bondholders was confined to Anglo Irish Bank. The most to be gained from such a move at that time was €3 billion: no small sum but tiny in the context of the overall bank bailout and the titanic retrenchment required to restore order in the public finances.

Serious fault can be found with the ECB. Be it in relation to pre-bailout leaks from the Eurotower or the Anglo promissory notes, there are ample reasons for the Government and its Fianna Fáil-led predecessor to look askance at Trichet and other ECB officials.

All of this came at the culmination of an emergency brewing for years which had its root in epic political and banking laxity right here at home.

Although Ireland’s loss of investor confidence in the autumn of 2010 was greatly amplified by rampant turmoil in the euro zone, supersized banking losses assumed by the State under the direction of its elected leaders were at the heart of the problem.

The bank guarantee of 2008 was made in Dublin. A fortnight earlier, on the night after Lehman Brothers collapsed, Brian Cowen sang the Mountains of Mourne to a Fianna Fáil think-in. In April 2006, as the property market neared the peak before the collapse, Bertie Ahern made little of the relentless rise in property borrowing and blithely said there was no sign of a downturn. “I’m always sceptical of the glass half empty,” Ahern said at the time.

The prospect of other ECB officials turning up also seems remote. The ECB’s troika representatives appeared at a handful of press conferences in Dublin but generally hid from public gaze. There is every reason to believe a similar attitude would be adopted in relation to the inquiry. Wholly unsatisfactory as that would be, it should not obscure the wider work of the investigation.

The greater likelihood is that the ECB will send Central Bank governor Patrick Honohan, himself a member of the ECB governing council. In his own contribution to the book, Honohan says troika negotiators “dangled but ultimately withdrew support for” the notion of imposing losses on some bondholders. The ultimate decision was taken on a teleconference to which no Irish representative was invited. That pretty much says it all. Brian Lenihan: In Calm and Crisis, Merrion Press

1 Coronavirus: Property rental in the jaws of the epidemic
2 I want to change my will quickly in case I fall ill. Do I need a lawyer?
3 Collison brothers worth an estimated €2.9bn each
4 WhatsApp limits message forwarding to slow spread of misinformation
5 Central Bank freeing up rainy day money could facilitate up to €16 billion in lending
6 EU finance ministers hope to thrash out Covid-19 recovery plan
7 Kerry fintech Taxamo agrees deal with Deloitte
8 Irish back pain medical device group to pull stock market listings
9 Purchase limits eased at supermarkets as trading levels ‘consistent’
10 How can the State support me now I’ve lost my job?
Real news has value SUBSCRIBE