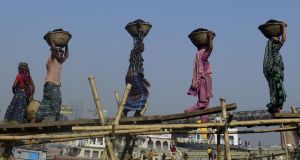 Bangladeshi labourers: while Bangladesh is one of the world’s poorest countries its gross domestic product grew 6.1 per cent in 2014. Photograph: Munir uz Zaman/AFP/Getty Images

Bangladesh, one of the world’s poorest countries, is not necessarily a place you would think of when exploring future possibilities in south Asia. In addition to long-standing economic problems, a recent campaign of protests and transport blockades by the country’s second biggest political party, the Bangladesh Nationalist Party (BNP), has put pressure on the economy.

There are question marks over Bangladesh’s future stability, as violence leading up to the January 2014 election killed more than 300 people: since then dozens more have died in a standoff between prime minister Sheikh Hasina and BNP leader Begum Khaleda Zia.

However, gross domestic product grew 6.1 per cent in 2014, and Bangladesh aspires to be a middle-income country by the time of its 50th birthday, in 2021.

The aim is to provide transparency and predictability of trade procedures, increase the compliance level and reduce the cost of doing business for the trade.

Chris Lewis-Jones is project team leader to build the facility, called the national trade portal of Bangladesh, and he highlighted the importance of this project as a stepping stone to greater transparency and certainty in international trade with Bangladesh.

“This will, in turn, lead to economic growth and improved employment. This project is a modest step on the path to realising the government of Bangladesh’s strategy of becoming a middle-income country by 2021,” he said.

Directing the project is Singapore-based Trevor O’Regan of PM Group. This is the company’s first contract in Bangladesh.

“Bangladesh has achieved impressive growth – averaging at over 6 per cent per annum over the past 10 years. The country has aspirational targets which point to a bright future. Sustained development will be essential to further accelerate growth and meet the rising expectations of the population,” he said.

“With a population of 165 million, there are opportunities for Irish companies with the international financial institutions and multilateral development banks in the area of technical assistance,” said O’Regan, who is also a director of the Asia Trade Forum.

“The various international financial institutions have a comprehensive portfolio of projects ongoing and in the pipeline for Bangladesh to support its growing economy and infrastructure, and we at PM Group hope to build on our first win in Bangladesh going forward,” he said.

Another company with strong Irish links, the engineer Arup, has been working with Habitats for Humanity on urban resilience initiatives to help slum-dwellers there.

Ratings agency Fitch said in a research document that the repeat of violence thus far in 2015 shows tensions remain high, and may further damage foreign investor perception regarding the country’s stability. “Still, it is important to note that the economy has proven relatively resilient to political protests and blockades in the past,” it said.