This week: Robotics update, new jargon for firing people and the French state of mind 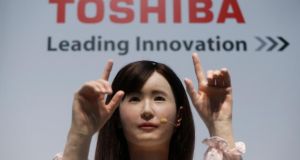 There’s a new addition to our occasional series of updates from the world of robotics. Meet Ms Aiko Chihira, an android created by Toshiba, who introduced herself – itself – to the crowd at the Combined Exhibition of Advanced Technologies Japan event, held near Tokyo this week.

Years that the Euro Disney theme park near Paris has been open. It is Europe’s top tourist attraction by visitor numbers, but its finances have long been a rollercoaster ride. Could there be an unhappy ending?

Attendance has slipped below this level in the 2014 fiscal year, down from 14.9 million last year. Before the financial crisis, the numbers who queued to see Mickey Mouse each year were comfortably above 15 million.

Euro Disney’s gross debt, which is at 15 times its earnings is “off the charts”, its finance director admitted. This week it was announced that its 40 per cent owner, the Walt Disney Company, will come to its rescue, Princess Anna-style.

“Position eliminations” is an example of corporate jargon that actually makes a bad thing – job losses, redundancies, layoffs – sound even worse. Who wants to be eliminated? I’d much rather lose my job, thanks.

It comes courtesy of US cable network television company Turner Broadcasting, a subsidiary of Time Warner, which this week announced “position reduction” across its global workforce. Staff numbers are set to shrink by 10 per cent, which means about 1,475 people will be eliminated. But why?

“The position eliminations are one component of a comprehensive initiative and company reorganisation to focus resources and prioritise investment in programming, monetisation and innovation as near- and long-term drivers of growth,” it said. Translated: We don’t need you any more.

Getting to know: Emmanuel Macron

Did someone say France was “finished”? Not if Emmanuel Macron (36), the newish French economy minister, can help it. “Despite his youth,” the New York Times posits that the ex-banker is a major force behind president François Hollande’s recent shift to a policy of “no austerity, please, we’re French”.

While John Lewis boss Andy Street is probably still cringing after backtracking from his claim that the French were “sclerotic, hopeless and downbeat”, Macron has been busy observing that the French are “always obsessed by our own weaknesses . . . it’s sort of a French state of mind”. He can say that because he’s French.

But the man depicted as a crying baby on a French satirical puppet show has something in common with Street, as last month he was forced to grovel out of a gaffe in which he branded French abattoir workers “illiterate”.

Which cities in the world head the list of places where job-seekers would most like to get a job? A survey of 200,000 people in 189 countries by Boston Consulting Group and a website called Totaljobs.com has come up with a definitive ranking. Dublin came 24th, which seems fair enough. Here’s the top five:

1 London: Selected by 16 per cent of the respondents as the place they would most like to find employment and get up at 5am for the rest of their working lives.

2 New York: The city that allegedly never sleeps was the choice of 12 per cent of respondents, who fancy living in “hot” Brooklyn neighbourhoods such as Bushwick or Greenpoint.

3 Paris: Mais oui, the French capital comes a creditable third, being the first choice of 9 per cent.

4 Sydney: Few places in the world are more beautiful than the parts of Sydney Harbour where it’s just you and the lizards.

5 Madrid: The balmy Spanish city edged cool Berlin into sixth place – but are there actually any jobs available there?

1 Aldi empire wracked by family feud
2 Will PTSB be Ulster Bank’s knight in shining armour?
3 TikTok to be banned from US app stores from Sunday
4 Cliff Taylor: What permanently low interest rates mean for you as a saver or borrower
5 NatWest considers closing Ulster Bank in the Republic
6 Gabriel Makhlouf: ‘A full second lockdown would be very serious for the economy’
7 NatWest confirms review of Ulster Bank as Covid-19 bites
8 Volkswagen close to selling its Bugatti supercar brand
9 What’s happening with the pandemic unemployment payment?
10 How Ireland managed to green the White House
Real news has value SUBSCRIBE