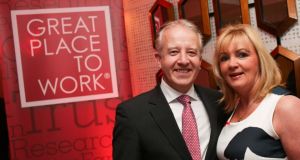 John Ryan, CEO of Great Place to Work Ireland, with Louise Phelan of PayPal, who was recognised as Ireland’s Most Trusted Leader 2014.

Louise Phelan, PayPal’s vice-president of operations for Europe, the Middle-East and Africa, has been awarded the title of Ireland’s Most Trusted Leader at the Best Workplaces in Ireland awards ceremony, which was held in Dublin last night.

Ms Phelan, who is currently serving as president of the American Chamber of Commerce, has overseen the expansion of PayPay’s Irish operation since it announced an additional 1,000 jobs two years ago.

Technology company 3M Ireland, communications group Core Media and Diageo’s demand division were named as the best small, medium and large workplaces respectively at the annual event, which is in its 12th year.

1 Irish company to test vaccines on volunteers deliberately infected with Covid-19
2 Air travel never going ‘back to way it was’
3 Eir takes on extra staff as ComReg chases it on complaints
4 Should I switch bank now with Ulster Bank at risk of closing?
5 Bank of Ireland sees more than 1,400 staff apply for redundancy
6 Stripe wins more corporate customers, announces Salesforce deal
7 Why working in an office beats living at work
8 ECB plots Amazon-style website to sell soured Covid loans
9 South Dublin land at €19m has scope for up to 500 homes
10 How to bring a hotel group through a pandemic
Real news has value SUBSCRIBE