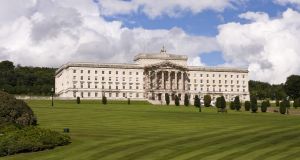 The official line from NIO headquarters at Stormont House in Belfast is that: “Northern Ireland is stronger, safer and better off as part of a United Kingdom that remains in the European Union”

Braving unpredictable elements in Northern Ireland is an art in which Owen Paterson is well practised.

Whether it is a walkabout on a wet morning in Belfast’s Royal Avenue to talk about the drawbacks of the European Union, or a tense debate about the changes that Brexit might deliver for the local business community, the former secretary of state for Northern Ireland always likes to remain calm in the face of an impending storm.

Paterson may no longer have a day job in the North – he was shadow secretary and subsequently secretary of state from 2007 to 2012 – but he maintains he still has the best interests of Northern Ireland at heart.

That is why he was back yesterday to share his thoughts on why it is better for the North to be “outside of the European Union as part of the UK – the fifth biggest economy in the world”.

Paterson claims the EU is “leaving us behind” and that the euro zone is moving towards a treaty change which will create a new federal state – one which he believes the UK can never be part of.

He is adamant that if the UK remains inside the EU its sphere of influence is going to become increasingly limited.

Paterson’s message is that Brexit would help free the UK from bowing to EU law and its European courts and give the UK greater control over how it spends its resources.

He says the UK is contributing billions of pounds to the EU but has very little say in how it is spent.

Paterson also claims it is “ludicrous” to suggest that Brexit could pose any threat to the peace process or result in a new border being built overnight between Northern Ireland and the Republic.

He also argues that the common travel area arrangements which exist between the UK and the Republic which mean there are no passport controls between the two jurisdictions would continue and that “electronic” solutions – which already exists across Europe – would be put in place for cross-border trade.

But while Paterson is touring the North reassuring farmers and fishing communities that they will not suffer if EU subsidies dry up – because they will get new UK financial support instead – his former ministerial home – the Northern Ireland Office (NIO) – is not convinced.

The official line from NIO headquarters at Stormont House in Belfast is that: “Northern Ireland is stronger, safer and better off as part of a United Kingdom that remains in the European Union” and for a wide number of reasons.

According to the NIO in the past five years over two fifths of all foreign direct investment projects won by Northern Ireland have been funded by investment from the EU.

Paterson’s former office also highlights that the North exports in the region of more than £3.6 billion worth of goods to the EU each year – which is more than Northern Ireland exports to anywhere else in the world.

In evidence submitted to an inquiry currently being conducted by a House of Commons committee on Brexit and the North, the NIO said that since 1998 the value of Northern Ireland’s exports to the EU has increased by over 50 per cent in real terms.

It is not just exports that are an important Brexit consideration for the North according to Paterson’s former NIO colleagues, they also point to imports of a somewhat different nature which are playing an increasingly important role in growing the local economy and that is people.

Tourism statistics show that 653,000 visitors came to the North from Europe in 2014 and spent almost £140 million.

Aside from the economic issues the NIO says it is also concerned about the security implications of Brexit.

“The UK and Ireland will always co-operate closely against terrorism, but membership of the EU enhances our ability to co-operate with member states to combat crime and terrorism and keep our country safe,” the NIO asserts.