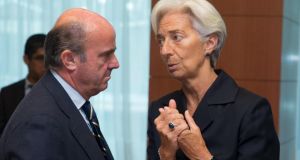 Greece will fall into arrears with the International Monetary Fund and cannot receive any further loans when the Athens government fails to make a €1.55 billion loan repayment falling due today.

A Greek government official confirmed that it will not be making the payments which, it had notified the Washington-based lender earlier this month, would be paid in a bundle of other loans.

As Greece’s financial position deteriorated amid political discord, the Obama administration stepped up its monitoring of the crisis and urged all parties to reach agreement on the terms of a new bailout.

The decision of the Greek government to call a referendum for Sunday, July 5th to decide on new conditions to be applied by country’s creditors in exchange for more bailout funds has thrown financial markets in the US and abroad into turmoil.

The IMF has said that it will not technically view the non-payment of its loans as a default but will deem the missed payments as “in arrears.” Likewise, the three major credit-rating agencies have said the missed repayments won’t constitute a formal default, which means it is unlikely to hurt Greece as a missed payment to a bond investor would.

“If they are not paid on Tuesday night, then there is a series of procedures and notifications that I have to initiate,” IMF managing director Christine Lagarde told news channel CNBC.

“But technically, any country that does not pay on due date is in payment arrears vis-a-vis the fund, and the consequences are that the fund cannot disburse vis-a-vis that country until the arrears have been paid.”

US president Barack Obama spoke to French president François Hollande by phone to discuss the Greek debt crisis and they agreed it was important to put together a package of reforms for Greece to return to sustainable growth, the White House said yesterday.

Mr Obama’s spokesman Josh Earnest said that reaching that goal was “in the interests of all parties at the negotiating table.”

The call came a day after the US president spoke with German chancellor Angela Merkel on Sunday.

“The two leaders agreed that it was critically important to make every effort to return to a path that will allow Greece to resume reforms and growth within the euro zone,” said the White House.

“The leaders affirmed that their respective economic teams are carefully monitoring the situation and will remain in touch.”

“That would certainly be our preference as well,” he said.

Asked about the Greeks repaying the IMF loans, Mr Earnest said: “We have long made it clear that we expect the Greeks to keep their commitments.”

Mr Obama’s spokesman even fielded a question from a reporter about concern that the instability in Greece might be used as a gateway for Islamic extremists entering Europe from the Middle East.

Mr Earnest said that it was “in the interest of the United States for Europe to continue to be closely integrated, strong and effective.”

This gave the US administration confidence that a package of reforms and financing will be found to allow Greece to return to a path of economic growth and debt sustainability, he said.

Carl Weinberg, chief economist at New York-based High Frequency Economics said: “The decision not to pay creates a miasma of uncertainty over the treatment of all Greek sovereign debt securities and loan agreements... this will be unsettling to markets.”

“In my humble opinion, a refusal by Greece to make a payment on time should certainly raise flags with both the credit raters and the auditor,” he added.

1 Michael Smurfit: ‘I asked Trump to invite me to the White House for my 80th birthday’
2 ‘I’m so lucky to be in the Caribbean – a million miles from Derry Girls’
3 ‘The recovery needs to be a full-scale economic renewal’
4 Tobacco makers still trying to make a mint from Irish menthol market
5 Ryanair expects air fares to fall when flights take off again
6 Joint accounts: if one of us dies, can the other access the money?
7 Small businesses are cannon fodder in zealous anti-virus experiment
8 Ireland stands to benefit in a big way from investing in public transport
9 Minister calls on EU to act against tobacco firms ‘undermining’ menthol ban in Ireland
10 Lioncor gets planning permission for ‘house of Europe’ project
Real news has value SUBSCRIBE